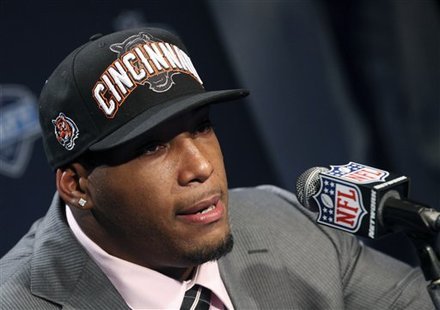 The next time Devon Still suits up for a football game, he will be wearing orange and black instead of blue and white. The former Penn State All-American defensive tackle was selected by the Cincinnati Bengals with the 53rd overall pick of the NFL Draft last night. Still, who was one of twenty six prospects invited to Radio City Music Hall for the draft, waited longer than most expected to hear his name called. Recent injury history and a questionable motor are contributing factors that led to five defensive tackles to be taken before Still.

Over the previous five NFL drafts before 2012, the players selected with the fifty third pick were:

Still hopes to be more like LeSean McCoy than Limas Sweed. A look at the Bengals current depth chart can be found here. The pertinent information is that Still will likely be rotating with fellow defensive tackles Domata Peko and Geno Atkins. This is not a bad situation to be in as it offers a chance for playing time right away while being surrounded by some productive NFL players.

Still will go down in the draft records as a second round pick, but could be a big steal if he can play up to his potential.

The Cincinnati Bengals have not won a playoff game since 1990. Still hopes to help change that as his NFL journey begins.

For more draft coverage, check out our preview from a few days ago as we wait to see if anymore Nittany Lions will have their name called on the third and final day of the 2012 NFL Draft.

Share via
Devon Still Bengals Bound
https://staging.onwardstate.com/2012/04/28/devon-still-bengals-bound/
Send this to a friend