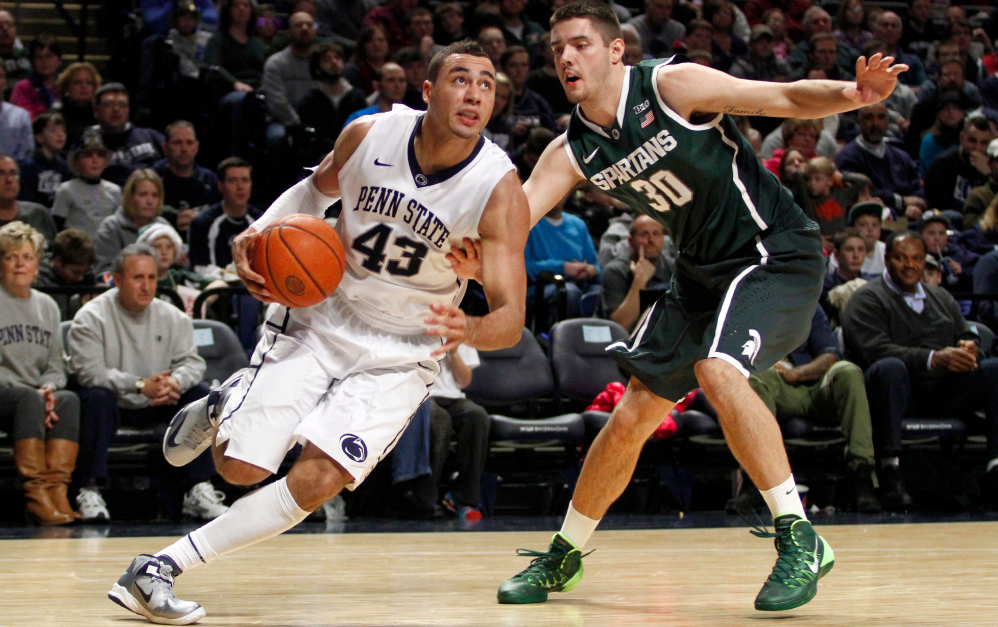 It’s usually clichéd to say that a basketball game is a tale of two halves, mostly because discussing a game in such simple terms is often inaccurate.

However, Penn State’s 79-63 loss to fifth ranked Michigan State (12-1, 1-0) was exactly that. The Nittany Lion (9-5, 0-1) team that took the floor in the first half looked like a tournament team, the kind of squad that could finish in the top half of the Big Ten with no issue. However, the Penn State team that came out for the second half looked completely different, like last year’s team that only won two Big Ten games.

The Nittany Lions dominated for most of first half. Behind a combined 30 points on 10-for-15 shooting from the field and 5-for-6 shooting from three from D.J. Newbill and Brandon Taylor, Penn State raced out to a 47-40 halftime lead. The 47 points were tied for the most allowed by the Spartans in a half this season, and was the third time this year that Michigan State trailed at the half.

Perhaps the most surprising aspect of the team’s first half performance was that star guard Tim Frazier struggled for much of the frame. Frazier scored 2 points on 1-for-6 shooting during the frame, although he did find other was to impact the game. The senior dished 5 assists, pulled down 3 rebounds, and had 2 steals during the game’s first 20 minutes.

“I have to give Penn State a lot of credit, that first half, they blitzed in every way, shape, and form,” Michigan State head coach Tom Izzo said. “They made shots, they played harder, they played better defense, and they really beat us with the pick and roll and we just covered it about as poorly as you can. It was some our fault, but give them credit because they not only executed well, but they made shots and when those guys are making shots like that, it’s a much improved team.”

During the second half, Michigan State looked like the fifth best team in America, while Penn State looked like one of the worst teams in the conference. While Izzo said it was because he threatened to keep his team in State College for New Year’s instead of returning to East Lansing, it was a mix of the Michigan State getting hot from the field and Penn State struggling for the entire frame offensively and defensively.

The Spartans started the half scoring 10 straight points, and between that and an 8-0 run later in the frame, led by as many as 19 points, despite trailing at the half. Michigan State outscored Penn State 39-16 during the game’s final 20 minutes, while no Nittany Lion scored more than five second half points.

“They just played their basketball in the second half,” Newbill said. “That’s what good teams do. They came out strong, we knew they were gonna come out strong, we just couldn’t run with them.”

“We gotta play 40 minutes,” Taylor said. “We played a great 20 minutes, but the game is 40 minutes. We gotta take some of the good things we did in the first half, watch film, and bring it into the whole game.”

The Nittany Lions shot 20-for-52 (38.5 percent) from the field for the game — its second lowest mark of the season — and 9-for-21 (42.9 percent) from downtown. Brandon Taylor led the way with 18 points, while Newbill chipped in 17. Frazier had almost unquestionable his worst game of the season, scoring 7 points on 3-for-12 shooting with 5 assists and 4 rebounds.

“We gotta learn a lot from this, because we do have a chance,” Pat Chambers said. “But mentally, we’ve got to get way tougher. And they were, they were tougher, and they showed it, and I felt like we had poor body language and did some things I haven’t seen in a while, and that’s gotta change.”

For all of Penn State’s struggles tonight, the entire first half showed that the Nittany Lions could actually be something special this season. In fact, the team gained at least one fan tonight: Tom Izzo.

“I think they got good players now and good enough players to win,” Izzo said. “They get everybody working, they get the transfers in there, and this team is gonna be a good team before the month of January is over.”