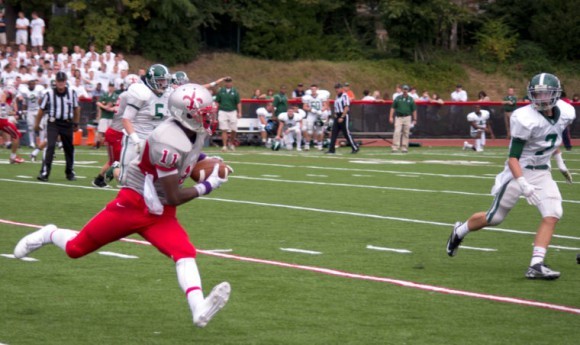 Four-star defensive back Garrett Taylor (Richmond, VA) has committed to Penn State, joining the class of 2015, and capping off a successful recruiting weekend for head coach James Franklin. Taylor is ranked No. 48 on Rival’s Top 100.

I have officially committed to Penn State!!! #WeAre #PSUnrivaled

Taylor, who comes in at 6-foot-1 and 195 pounds, had originally committed to Michigan, but decommitted and signed on with the Nittany Lions. Taylor chose Penn State over other prominent schools such as LSU, Ohio State, and Clemson, among others. According to 247Sports, Taylor is still scheduled to take his official visit to Baton Rouge on Dec. 5.

The St. Christopher’s product has a knack for the ball, producing four interceptions and 23 tackles in his sophomore season. Taylor will join fellow defensive back John Reid (St. Joe’s Prep) as part of the 2015 recruiting class, and will help form what could be a fearsome tandem in the secondary.

The addition of Taylor only further solidifies what is already a stellar recruiting class for Franklin. Other notable commitments include offensive tackle Sterling Jenkins and wide receiver Juwan Johnson, to name a few. Rivals still ranks Penn State’s Class of 2015 at No. 11, but with the addition of Taylor, the Nittany Lions should continue to slide closer to the Top 10.

David is a senior from Rochester, NY, nestled right in beautiful Western New York. He is majoring in Broadcast Journalism, and as an avid sports fan, he passionately supports the Buffalo Bills and Buffalo Sabres. He is the first Penn Stater from his family, and couldn’t be prouder to represent Penn State University. In his free time, he likes to alpine ski, and play golf. You can follow him on Twitter @abruz11, and can contact him via email at davidabruzzese@onwardstate.com.