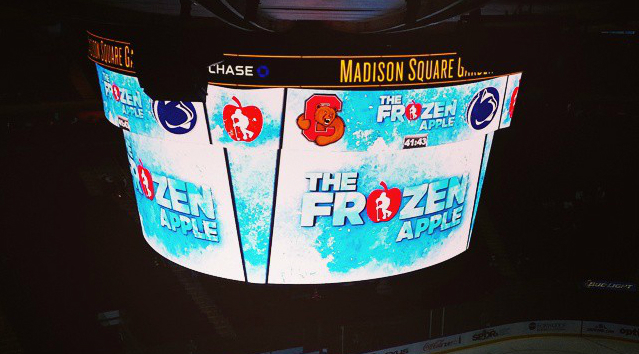 Men’s hockey came up empty on Saturday night in Madison Square Garden in the heart of downtown New York City, losing to Cornell 3-1 in the Frozen Apple. Missed chances and a late goal sealed their fate, as the team squandered a chance to build upon an impressive early season featuring almost as many wins through the first 13 games (7) as they had all of last year (8).

While a win over the Big Red would have sweetened the 236-mile, five hour bus ride from New York City back to State College, head coach Guy Gadowsky and the players still left the World’s Most Famous Arena with a smile on their faces, thanks to an unforgettable experience.

“Being in New York is exciting,” said head coach Guy Gadowsky, who was making his first appearance behind the bench at MSG. “No one in our program had played in Madison Square Garden before. And no one in our program has played Cornell. It was a tremendous experience. It’s an exciting event to be a part of, and it’s something we’re thankful for.”

Gadowsky stressed that it was not only a rewarding experience for the student-athletes, but for the team staff as well. Playing on the road in a hostile environment in unfamiliar territory is a tough task for any team, let alone one in the midst of a two-month long road trip that won’t conclude until Penn State hosts Ohio State in Pegula Arena on Jan. 9.

“The Big Ten Championships are in Joe Louis Arena, so having an experience like this is not only a great experience on its own, but it’s something that will help us down the road,” Gadowsky said.

In fact, Penn State is no stranger to playing in NHL arenas. Dating back to the program’s jump to Division 1 in 2012, the Nittany Lions have played in four different professional hockey venues. Penn State lost to Robert Morris in Pittsburgh’s Consol Energy Center in 2012 in the Three Rivers Classic before upsetting Ohio State, and knocked off Vermont later that year in Philadelphia’s Wells Fargo Center. Last year, the team finished 1-2 in the confines of the Penguins and Flyers before knocking off Michigan in the first round of the Big Ten Tournament in Minnesota’s Xcel Energy Center.

Although the team has proven themselves quite the experienced travelers, there was still plenty of room for new places. For Penn State captain Patrick Koudys, it was his first time in New York. He got to take a visit to Times Square with the team after dinner on Friday night, and walked around the city with a few teammates on Saturday morning to take in the sights and sounds.

The senior defenseman from Canada also had his family in the building to watch on Saturday night after watching his cousin play basketball in MSG on Friday.

“It was cool to have the whole family come down and watch him and then watch us play,” Koudys said, “so it was kind of a win-win for my family. We just would have liked to have won like they did.”

For goaltender Matthew Skoff, it was less about gathering experience and more about soaking in the rich tradition of the historic arena. Skoff, who made 22 saves on 24 shots in a loss, acknowledged the presence of the great athletes that once stepped foot inside Madison Square Garden. From the moment he stepped on the ice, he could feel the gravity of the moment.

“I definitely got the chills,” Skoff said. “Not everyone gets to play here, unless you’re a professional at the top ranks. It’s something that you have to treat as just another game, but it is MSG, and we are in New York. Obviously the result isn’t what we wanted, but it was a lot of fun regardless just to be here and be a part of one of the best sporting arenas of all time.”

You might think Skoff would admire the past and present goaltending greats that played at Madison Square Garden before him, but you’d be wrong. In fact, he wan’t even thinking about hockey.

“I thought about how many great athletes have played their sport here, from Michael Jordan who played so well,” Skoff said, referring to Jordan’s dominance at MSG, including a 55-point performance in 1995 after making his dramatic comeback to the NBA.

“It’s Madison Square Garden,” he added. “If that doesn’t get you up to play a game, I don’t know what will.”

CJ is a senior journalism major from Long Island and Onward State's Sports Editor. He is a third-generation Penn Stater, and his grandfather wrestled for the university back in the 1930s under coach Charlie “Doc” Speidel. Besides writing, one of his favorite activities is making sea puns. You can follow him on Twitter @CJDoon, and send your best puns to cj@onwardstate.com, just for the halibut.

Share via
Men\'s Hockey Thankful For Chance To Play In Madison Square Garden
https://staging.onwardstate.com/2014/11/30/mens-hockey-thankful-for-chance-to-play-in-madison-square-garden/
Send this to a friend