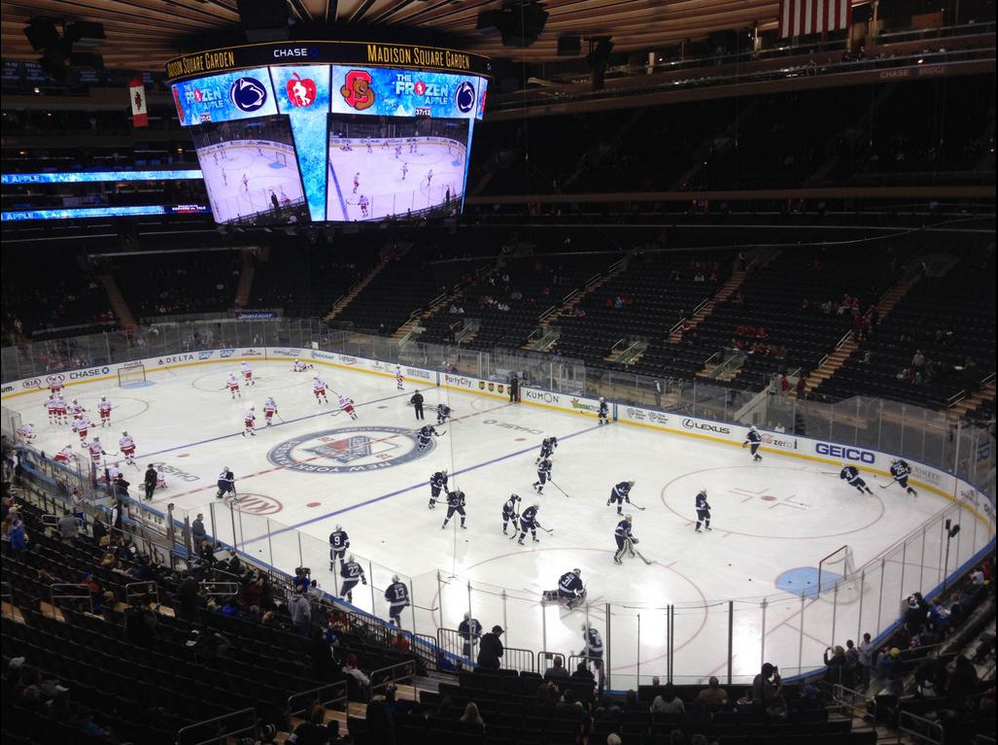 The Nittany Lions’ (7-4-2) hockey team traveled to New York City Saturday night to take on Cornell (4-4-1) in the “Frozen Apple”. In the first meeting between the teams in 70 years, Cornell took the game by a score of 3-1. The environment was as electric as a college hockey game has ever been, as the teams faced off in front of a nearly sold-out crowd of 15,027 at Madison Square Garden.

David Goodwin opened the game’s scoring nine minutes into the first period. Taylor Holstrom drove down the right wing with speed and fed the puck into the slot, where it deflected off of Casey Bailey to Goodwin, who buried it. The line continued its unreal play early this season, as Holstrom and Bailey are both scoring at higher than point-per-game clips.

The first period saw lots of back-and-forth action. There were multiple sequences where a team would go on a rush, miss the shot, and rush back the other direction. It wasn’t the cleanest period, but it was one of the most exciting all year.

Regardless, no more scoring occurred in the first. The period saw the up-tempo Nittany Lions outshoot Big Red 12-5.

Right off the bat in the second period, Cornell’s John Knisley laid a dirty hit to the head on Holstrom. Knisley received a five-minute major interference penalty that was quickly neutralized by a slashing call on Goodwin. After Goodwin left the box, coach Guy Gadowsky’s power play unit racked up some of the best chances of the night, but couldn’t bury any.

With 9:24 remaining in the frame, Cornell’s Patrick McCarron took an interference penalty to put the Nittany Lions back on the powerplay. Multiple failed entrances to the offensive zone killed the momentum the call gave them, and they made nothing of the man-advantage.

Shortly thereafter, with six minutes remaining in the period, Cornell’s Holden Anderson fired a shot from the left faceoff circle through traffic, and the puck beat Penn State goalie Matt Skoff to knot the game at 1-1. Knisley, of blindside headshot fame, was credited with the goal.

The second period came to a close as Holstrom received yet another hit from behind, sending his helmet flying. An appropriate Flyers/Rangers-style brawl broke out as all of the players on the ice grabbed a partner, discarded their equipment, and began throwing bones. Penn State captain Patrick Koudys and Cornell’s McCarron were both given roughing penalties, despite each team likely deserving some more. The score remained 1-1 after two, but the tone for the final period was set.

“It’s just hockey,” Gadowsky said after the game, but the fight really seemed to spark the Big Red.

Cornell came out like a team possessed at the start of the third, but Skoff stood on his head to keep the game tied. After killing off seven minutes of what seemed like constant Big Red pressure, Curtis Loik fired a shot off of Cornell’s post, but Scott Conway couldn’t get put the rebound past goalie Mitch Gillam. A few minutes later, Max Gardiner danced around Gillam, but the latter made a great glove save to keep the game tied.

With 8:32 remaining, Big Red was able to capitalize on its earlier momentum when McCarron fed Joel Lowry an easy backdoor tap-in to put Cornell up 2-1. A defensive breakdown left Skoff helpless, and he couldn’t stop the puck on a diving attempt.

Once it got the lead, Cornell went into its standard defensive shell. The possession arrow was Penn State’s for most of the remainder of the game, but Gillam would not surrender. A full two minutes of empty-net play for the Nittany Lions proved fruitless, as Knisley scored again and the Nittany Lions left the ice with a 3-1 loss. Share via
Penn State Hockey Falls to Cornell at Madison Square Garden
https://staging.onwardstate.com/2014/11/30/penn-state-hockey-falls-to-cornell-at-madison-square-garden/
Send this to a friend