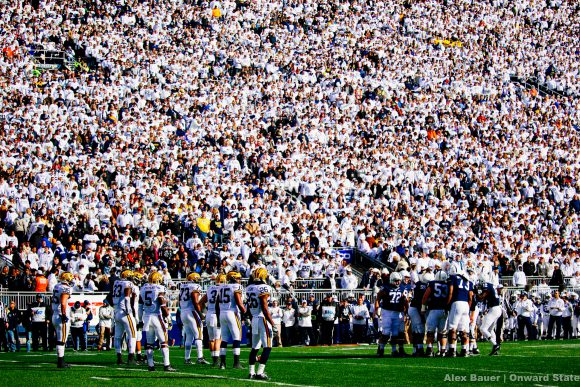 It’s no secret Ohio State, Michigan, and Michigan State consider each other to be primary rivals in football. Penn State considers itself too good to be rivals with teams like Rutgers, but doesn’t get enough respect from the Big Ten’s upper echelon to have a primary and mutual rival. Former Maryland head coach Randy Edsall said Penn State was his team’s rival, but it’s important to note that Maryland is bad. Pitt’s one of Penn State’s best chances at a rival, but the teams haven’t played in 16 years.

The general feeling around Penn State football is we don’t have a main rival, but it’d be nice to have more of a back-and-forth with Ohio State or Michigan. But what if there’s another solution, one that introduces a new team in a similar situation to Penn State’s schedule?

Enter the Texas Tech Red Raiders. On a Reddit thread titled “what is the most bitter rivalry that has been played 50 or less times?“, Texas Tech fan “thatcandospirit” started an anti-Penn State crusade.

“It’s been a while but [if I recall correctly], there was some thread a few months ago about schools that don’t have primary rivals. Some Ohio State fan mentioned that Penn State didn’t have any major rivals and someone responded that Tech was the same way (could have been the other way around). Someone mentioned, probably without knowing how over the top I would take it, that Penn State and us would make a good rivalry. I obliged.

So I’ve been slowly building up my hatred. I’ve learned about the enemy. Figured out their strengths and weaknesses. Then about 3 weeks ago, It began. Someone asked the perfect question and I responded. Didn’t get a whole lot of attention, but it was a start. Then a week ago it came up again. A bit bigger this time. Since then, I’ve been taking jabs and getting the word out whenever an opportunity arises.

Please feel free to join me in my crusade against the enemy Penn State. I can not do this alone!”

On a different thread, a Texas Tech fan explained to a Penn Stater that though you’d expect their rival to be Texas, TCU, or Oklahoma State, those three teams consider each other to be rivals. Similar to Penn State in the Big Ten, Texas Tech is left out despite having a respectable program.

Both teams went 7-5 in 2015 before losing their bowl game. The Nittany Lions lost in the TaxSlayer Bowl to Georgia and the Red Raiders lost the Texas Bowl to LSU — a team Penn State had a chance of playing in the Music City Bowl.

The two programs have only met once, and it was a thriller. The 1995 season-opener saw an unproven Red Raider team visit Beaver Stadium to meet the No. 4 Nittany Lions. Joe Paterno’s team beat Spike Dykes’ on a last-second field goal to win 24-23. Why wouldn’t we want more games like that?

None of Penn State’s other major sports have met Texas Tech in the last five years, save for the Lady Lions losing 70-66 on Dec. 3, 2011. It’s a tall and admittedly unlikely task to implement the Red Raiders on most teams’ schedules, certainly including football. Still, it’s fun to think about. Share via
DOTD: Could Texas Tech Be Penn State\'s Rival?
https://staging.onwardstate.com/2016/03/24/dotd-could-texas-tech-be-penn-states-rival/
Send this to a friend