Penn State Hockey Isn’t There Yet, But It’s Ahead Of Schedule 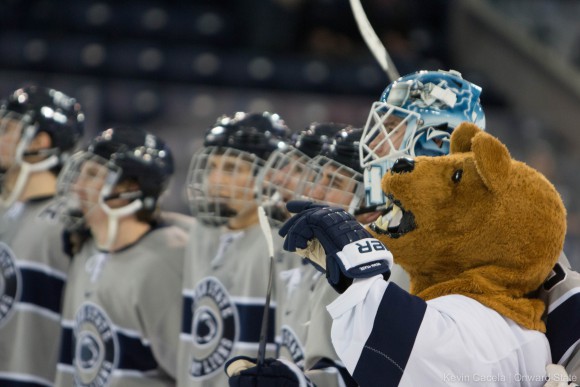 On March 19, 2015, Penn State finished the best season in its short history. Two days later, its best player became the first Nittany Lion to sign an NHL contract. The problem with setting such impressive records means that they’re hard to beat; after all, Casey Baileys don’t grow on trees.

With the graduation of Taylor Holstrom, Patrick Koudys, P.J. Musico, and more plus early departures by Bailey and Scott Conway, Guy Gadowsky’s 2015-16 team was a mystery. Some questions arose: Can the team maintain its high shot totals? Will a No. 1 goalie emerge? And can the freshmen step up and improve on the team’s 18-15-4 record?

As you probably know by now, the answer to all of those questions is “yes.” Not only did the team end its season at 21-13-4 in the Big Ten semifinals, it also sent three players to the AHL — Eamon McAdam and Luke Juha to the Bridgeport Sound Tigers, and Eric Scheid to the Portland Pirates. Andrew Sturtz, Chase Berger, Kevin Kerr, and Vince Pedrie stood out in a spectacular freshman class, and the departures of players who had been with the program since the start had no negative impact on how the team played “Penn State hockey.”

Expectations were all over the place for this team. Now, it’s clear that Penn State isn’t a one-hit wonder. Gadowsky is getting the team closer and closer to national prominence every year. The goal is an NCAA Tournament berth for the first time in program history — Penn State wasn’t expected to be this close just yet, but there are still a few obstacles to overcome before the dream is recognized.

The current top five teams in the USCHO Poll finished ranked in each of the last three years. Surprises are rare in college hockey and the usual suspects end up at or near the top. If teams like North Dakota and Boston University are Keaton and McManus, Penn State is Verbal Kint — there’s no way they could pull it off, right?

This season, the Nittany Lions split their series with Notre Dame, tied and lost to St. Lawrence, split two series with Minnesota, and lost to Michigan five (!!!) times. That’s a record of 3-9-1 against teams that finished the season ranked, and other than Michigan, Notre Dame was the highest ranked team at No. 13. Even more scary is that Penn State was outscored 34-65 in those games (admittedly, Michigan accounted for 33 of those goals against).

Penn State ended its season in the “others receiving votes” spot, instead of the No. 14-to-17 range it occupied for most of the season. It dominated teams like AIC and Sacred Heart but was dominated itself by superior teams. I don’t know the process to fix this problem, but it’s the most glaring one the team needs to work on — beating that upper echelon of teams, and joining them in the process.

Can The Goaltending Problem Stay Fixed?

From 2012-14, Matt Skoff was the man. He started most of the games and was a bright spot in net, while Eamon McAdam and P.J. Musico showed their value in spurts as backups. Last year, McAdam showed flashes worthy of his third-round NHL Draft selection and Musico shone as a third-stringer. This year, McAdam finally broke through. His .913 save percentage and 2.98 goals-against average (inflated by Michigan, of course) were the best on the team and among the best in the Big Ten. With Skoff’s senior season coming to a close, next year’s net looked like it was all McAdam’s. There were four days of excitement to speculate about how he would beat this year’s performances — and on the fifth day, he went pro.

Skoff and McAdam were with Penn State from the start, so 2016-17 will be the first time Gadowsky has entirely new netminders. Chris Funkey looked pretty good in four short relief appearances while incoming freshman Peyton Jones is a star in the USHL — still, it’d be reckless to predict how either of them will fare when thrust into a starting role in NCAA hockey. As soon as the goaltending situation seemed to be under control, it turned on its head again. It’s up to Funkey and Jones (dibs on that band name) to prove that this isn’t an issue at all.

How Do You Top This Freshman Class?

Sturtz, Pedrie, Berger, and Marsh ended up in the top half of Penn State’s scorers. Kerr was barely below the halfway mark, while Mendelson and Hamilton ended up towards the bottom. Sturtz led the team in goals and Berger was tied for second, while Pedrie was an All-Big Ten Second Team selection. Four forwards, three defensemen, and one goalie played their freshman seasons in 2015-16 and almost every one made a noticeable impact in every game. Next season, there will be six new forwards, three defensemen, and one goalie (while five forwards, two defensemen, and two goalies are leaving the team).

Blake Gober, Liam Folkes, Nathan Sucese, Sean Kohler, Nikita Pavlychev, and Denis Smirnov will try to replace the production of players like David Glen, Curtis Loik, and Tommy Olczyk. The first four incoming freshman are all under six-feet-tall but have had impressive careers in the USHL, CCHL, and OJHL. The last two commits are even more interesting in their own rights — Pavlychev is a Pittsburgh Penguins draft pick who stands at a program record 6-foot-7 and has been lauded for his defensive play. Smirnov was originally supposed to join the team last year but instead spent another season with the USHL’s Fargo Force, where he tallied 55 points in 53 games.

Blue-liners Kris Myllari and James Gobetz will play their first years of college hockey next year while Trevor Hamilton will make his Penn State debut after spending two years of NCAA eligibility at Miami (Ohio) then spending a year in the USHL. Myllari is a 6-foot-2, puck-moving defenseman — just the type of player Gadowsky can’t get enough of. Gobetz is a little bigger and defensive-minded, while Hamilton falls somewhere in between. He’ll only have two seasons to spend in Hockey Valley, much like Patrick Koudys did when he transferred from RPI. Penn State surely hopes Hamilton follows a similar career arc.

Everything about Penn State is unconventional, from its central Pennsylvania location to its rapid rise to success and its unrelenting shooting. There are no teams that make a good comparison and it’s hard to predict how the next season will play out, but there’s more reason for optimism than ever before. Outstanding prospects will join a team bolstered by some of the best returning players in the Big Ten, all under the careful watch of one of the best coaches out there.

Sure, the 2015-16 season is over and Penn State isn’t ranked. An unforgettable senior class is gone, in addition to the team’s best goalie — but it’s Penn State hockey, dammit, and next season can’t get here soon enough. Share via
Penn State Hockey Isn\'t There Yet, But It\'s Ahead Of Schedule
https://staging.onwardstate.com/2016/03/25/penn-state-hockey-isnt-there-yet-but-its-ahead-of-schedule/
Send this to a friend