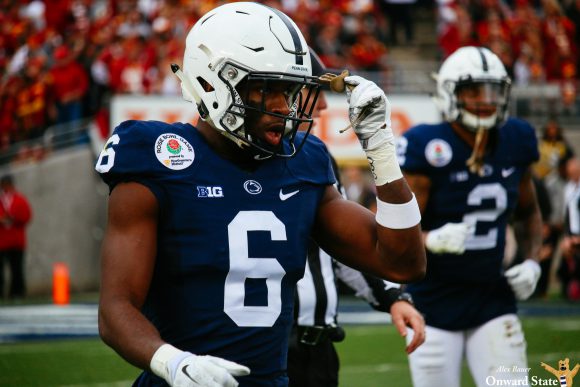 Former Penn State safety Malik Golden signed with the Pittsburgh Steelers Friday after being waived by the San Francisco 49ers on June 9.

The rookie out of Hartford, Conn., will immediately report to training camp at Saint Vincent College in Latrobe.

Congratulations to @goldchaingolden on joining the @steelers. Welcome back to the Keystone State! #WeAre pic.twitter.com/8S3OkwELVc

Heading into his senior season, Golden locked down a role in the starting lineup at strong safety after making four starts the year before. He racked up a career high 75 total tackles in 2016 — good for fourth on the Nittany Lion defense.

Golden will wear No. 30 alongside rookie Pitt running back James Conner, who owns the the league’s hottest-selling jersey, as they both compete for a spot on the final 53-man roster. This preseason, franchises are required to make just one cut instead of two– going from 90 to 53 by no later than 4 p.m. on Sept. 3.

Golden started 13 games last fall, only missing the Minnesota contest due to injury. Troy Apke started in his place against the Golden Gophers and is a leading candidate to permanently take the job opposite Marcus Allen during preseason camp in August. Golden graduated in December 2015 with a degree in telecommunications.

Share via
Rookie Safety Malik Golden Signs With Pittsburgh Steelers
https://staging.onwardstate.com/2017/07/28/rookie-safety-malik-golden-signs-with-pittsburgh-steelers/
Send this to a friend