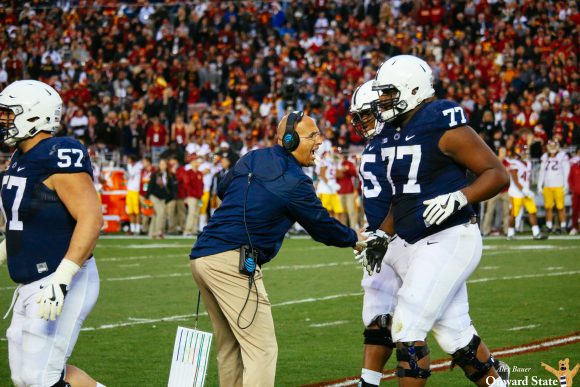 James Franklin predicted Penn State’s offensive line will be among the conference’s top units this season at Big Ten media days in Chicago earlier this week.

After two tough years of largely holding the offense back in 2014-15, new position coach Matt Limegrover orchestrated a tremendous turnaround during his first season on campus. Shortly following his hiring, the former Minnesota offensive coordinator held a home-run derby with his linemen at Beard Field to build chemistry.

Despite dealing with a handful of major injuries, Limegrover’s bunch kept plugging along as the Nittany Lions won nine games in a row last fall. They return 87 career starts and now count 11 linemen over 300 pounds on their roster.

Brendan Mahon surprised some when he won the starting left tackle job to open 2016, but the Randolph, N.J., native steadily gained confidence and played like one of the Big Ten’s best at the position before going down with an undisclosed season-ending injury. His 29 starts are the most of any Penn State lineman, but it’s still unclear where he’ll line up — tackle or guard.

Ryan Bates enjoyed a fantastic debut campaign at left guard, imposing his will on defensive tackles more often than not as a redshirt freshman. The athletic Bates often finishes his blocks way downfield — no better exemplified than on Saquon Barkley’s 81-yard touchdown at Purdue. The 6-foot-4, 305-pounder kept Barkley untouched 40 yards down the right sideline.

Bates said earlier this spring that he’s been working exclusively at left tackle, where he started the last four games of the season in place of an injured Paris Palmer. It’s unknown whether he’ll slide back inside to left guard or remain Trace McSorley’s primary blindside protection come September. Bates is a legitimate pro prospect at guard, but he may very well be Penn State’s best option at left tackle this season.

Connor McGovern pulled off the rare feat of starting up front as a true freshman, eventually beating out Derek Dowrey for the right guard job a few weeks into the year. The versatile McGovern has spent time at each position on the right side of the line, but will take the reins as Penn State’s starting center this fall. He checks in two inches taller and 15 pounds heavier than the graduated Brian Gaia.

Graduate senior Andrew Nelson suffered his second season-ending knee injury against Maryland last October, and while he intends to play at some point this season, it’s a mystery as to when he’ll be ready to contribute. With 27 starts under his belt, Nelson could make a positive impact as a player-coach on the sidelines if he’s unable to see the field again. The Nittany Lions would love to have him starting at right tackle, though.

Steven Gonzalez and Chasz Wright were pressed into significant roles earlier than the coaching staff would have liked, but they rose to the occasion on some enormous stages down the stretch. Wright, who checks in at a towering 6-foot-7, 354 pounds, started the last five games of the season — showcasing his impressive development since arriving on campus in 2014. If he and Gonzalez end up starting again this year as projected, they’ll anchor an already massive front five that will average nearly 323 pounds per lineman.

“We’ve had a lot of things change in the past year, and I think it was change for the better,” Bates said. “Seeing where we are now — we’re a young team — and what we could be, it’s scary seeing what we could do.”

Michal Menet is one of the highest-rated offensive line recruits to ever sign with the Nittany Lions, and when he’s ready to play — whether that’s against Akron or not — he’ll be hard to drag off the field. Menet’s an outstanding athlete who also played basketball for Exeter Township in Reading. He looks like a guard on the college level, but has the talent and frame to play virtually any position along the line.

Penn State evidently feels really good about what it’s got in its redshirt freshman tackles Will Fries and Alex Gellerstedt, as both have drawn high praise from Franklin for their play on the scout team at various points last season. Though neither has logged a college snap just yet, the Nittany Lions did a stellar job on the recruiting trail to recognize their potential and beat out a host of other top schools for their signatures.

Early enrollee Mike Miranda is another guy who Franklin and director of performance enhancement Dwight Galt have routinely mentioned as someone who could crack the two-deep this fall. While it’s extremely rare for true freshmen to play right away like McGovern, the fact that Miranda’s been on campus since January is invaluable.

Even though C.J. Thorpe is the top guard prospect in Penn State’s 2017 recruiting class, it would be a shock to not see him redshirt alongside fellow signees Robbie Martin and Des Holmes. It remains to be seen whether redshirt sophomore Sterling Jenkins will finally crack the rotation or keep refining his game behind the scenes for another season.

Here’s a quick guess at what Penn State’s starting five — from left to right — will look like against the Zips: Bates, Gonzalez, McGovern, Mahon, Wright.