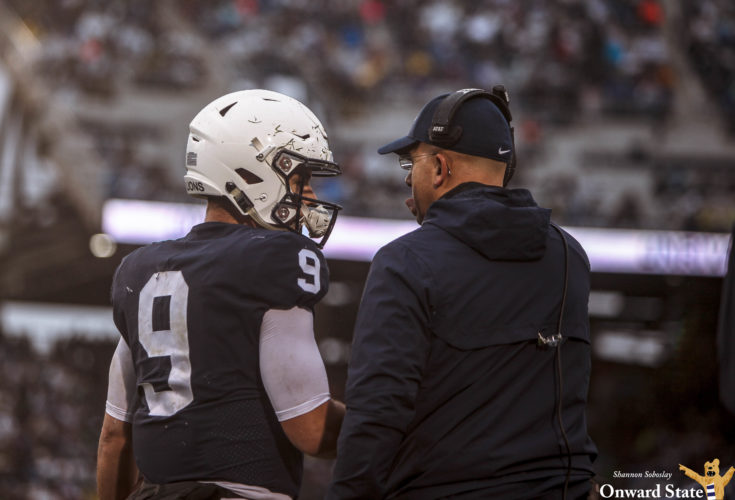 CBS Sports ranked Penn State football’s James Franklin as the eleventh-best head coach in the nation and the best among all coaches in the Big Ten.

Franklin slid just outside the top 10 after checking in at No. 10 in the same rankings last year, but he’s now considered the conference’s best head coach following Urban Meyer’s departure. He’s rated above Michigan’s Jim Harbaugh (No. 15) and Michigan State’s Mark Dantonio (No. 13) by CBS Sports.

“Franklin drops a spot out of the top 10 in this year’s rankings, but it’s likely due more to other coaches moving up than anything Franklin did,” author Tom Fornelli said. “Yes, the Lions took a small step back to 9-4 after winning 22 games between 2016 and 2017, but most expected them to.”

Notre Dame’s Brian Kelly’s 20-spot improvement to No. 7 and Florida head coach Dan Mullen’s rise from No. 13 to No. 10 pushed Franklin out of the top 10.

Nick Saban and Dabo Swinney are ranked No. 1 and 2, respectively, which may come as a bit of a surprise after Swinney’s Clemson dismantled the Crimson Tide 44-16 in the 2019 national championship game. Washington’s Chris Petersen, Oklahoma’s Lincoln Riley, and Texas A&M’s Jimbo Fisher round out the top 5.

Franklin is the best of seven Big Ten coaches listed in the top 25. Nebraska’s Scott Frost checks in at No. 25, and Paul Chryst (Wisconsin) and Kirk Ferentz (Iowa) occupy the 23rd and 22nd spots, respectively. Northwestern’s Pat Fitzgerald was ranked just one spot below Jim Harbaugh at No. 16.

In the most upsetting turn of events, Mikey graduated from Penn State with a digital & print journalism degree in the spring of 2020. He covered Penn State football and served as an editor for Onward State from 2018 until his graduation. Mikey is from Bedminster, New Jersey, so naturally, he spends lots of time yelling about all the best things his home state has to offer. Mikey also loves to play golf, but he sucks at it because golf is really hard. If you, for some reason, feel compelled to see what Mikey has to say on the internet, follow him on Twitter @Mikey_Mandarino. You can also get in touch with Mikey via his big-boy email address: michael.p.mandarino@gmail.com

Share via
James Franklin Ranked As Big Ten\'s Best Head Coach By CBS Sports
https://staging.onwardstate.com/2019/05/09/james-franklin-ranked-as-big-tens-best-head-coach-by-cbs-sports/
Send this to a friend