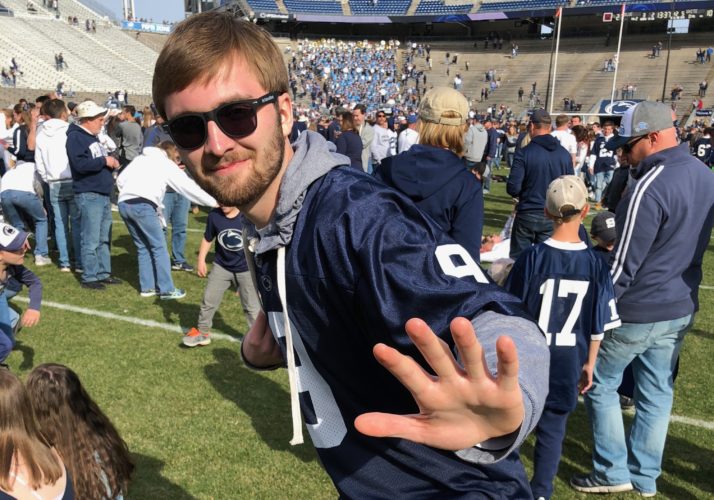 Eleven years ago, Onward State was born to three students in the unrenovated depths of Simmons Hall.

Since then, hundreds of staffers have graced it with their presence. But only a select few are given the chance to lead Onward State through the highs and lows of Penn State. Senior Anthony Colucci is one of those lucky folks, checking in at managing editor No. 15.

Throughout his time managing the site, Colucci led a team of about 60 staffers through the emotional roller coaster known as football season, the excitement of THON, and, most recently, the coronavirus pandemic.

Before he leaves for greener pastures, we sat down with Colucci to discuss what it’s like running the world’s most-followed student media outlet, what he does in his spare time (Editor’s note: Spare time? Who said anything about spare time?), and how he came to love Penn State.

Onward State: Tell the folks at home a little about yourself.

Anthony Colucci: I’m a senior (and soon-to-be graduate) from Martinsville, New Jersey, majoring in psychology and public relations. I joined Onward State three weeks into my freshman year and my college life has pretty much revolved around it since then, but I wouldn’t change a thing. I recently wrapped up my Schreyer honors thesis, which I did on how different media frames on social media influence audiences’ responses to a natural disaster. This fall, I’ll start a full-time job with IBM in New York City working in communications.

Before quarantine, when I wasn’t running around State College for stories or analyzing data in the Moore Building, you could normally find me in McLanahan’s any hour of the day, probably either drinking a beer, buying quinoa, or waiting for a Meatball Monday special.

OS: Why did you join Onward State?

AC: I was the editor-in-chief of my [high] school’s newspaper and had covered its sports for the local newspaper and on my personal Twitter account, so I knew I wanted to continue my love of writing in some way in college. I had read Onward State throughout my senior year and over that summer, so I was familiar with the blog’s distinct voice and it seemed like the best way to get involved and keep up with writing. I applied, got hired, and jumped right into things, covering a field hockey game two days after my first meeting.

One thing I think is ironic is when I joined, having already led my high school’s paper, I vowed I’d never be in charge of a publication again. But here I am.

OS: Why did you decide to apply for the position of managing editor?

AC: I was fortunate enough to work under and look up to four managing editors during my first three years. Lexi Shimkonis, Sara Civian, David Abruzzese, and Elissa Hill all inspired me with their dedication to OS and its growth, and from early on in my freshman year, I could identify ways I wanted to be more like each of them.

Each time one of them and so many of our other influential alumni left, I felt the need to pick up where they left off and continue their legacies. This normally came in the form of figuring out ways I could do anything and everything to help the blog and ensure it outlives any of our Penn State careers but ended with me being the guy running the meetings.

AC: The managing editor is the person ultimately responsible for all things Onward State-related. For the last year, I’ve led a team of 60 writers, photographers, and videographers and coordinated our content plans and news coverage on a daily basis. A large part of that included editing all the posts we publish each morning. I also worked with our publisher, LazerPro Media, and our sponsors on certain business-related decisions and projects. A typical day included writing breaking news, mentoring younger staffers, looking through Twitter for stories/new social media trends, working with LazerPro in strategy meetings, meeting with our sponsors, and ending the night editing posts for the next day.

OS: What is your favorite part about Onward State?

AC: As a freshman, I was given the opportunity to cover the national champion wrestling team, attend football practice, and pitch stories that I wanted to write, like this one about Jim Harbaugh’s khakis.

I appreciated being given all those opportunities and the freedom to take on big challenges and find what I loved from the get-go. Over the years, I’ve also tried my hand at taking pictures, making videos, doing a little graphic design, and creating a secondary market to sell football tickets.

Truly anyone is able to do and try anything here, so it’s a great way to learn new skills, especially learning how to fail. I’d be remiss not to use this opportunity as a recruiting pitch, so if these opportunities excite you and you have an interest in media, want to try something new, or just love Penn State, our application normally opens in August.

OS: If you had to live one day at Penn State over and over again, what day would you choose?

AC: I would go back to the 2017 White Out in a heartbeat. That day was awesome — from College GameDay to the (albeit naive) excitement of thinking Penn State was on the brink of a national title to the gorgeous mid-October weather to the game itself and the feeling inside Beaver Stadium. Nearly three years later, I still get chills thinking about that day. A close second is the 2018 wrestling dual against Ohio State. The atmosphere that night was more electric than anything else I’ve ever experienced — including a Beaver Stadium White Out.

OS: What has been your favorite Onward State article?

AC: The magnum opus of my Onward State career was the oral history we published last year about how Cael Sanderson came to Penn State wrestling in 2009. I had spent nearly the entire semester reading everything I could find about that period, interviewing an assortment of the people involved and affected, transcribing their quotes, and making sense of hours of recordings. The end product was something I still am truly proud of and a testament to what you have the opportunity to do with OS by having the freedom to chase ambitious, far-fetched ideas and the support to turn them into real results that people can enjoy and learn from.

OS: Do you have any advice for the new Onward State managing editor as well as the staff that you are saying goodbye to soon?

AC: Our new managing editor, Matt DiSanto, is more than prepared for this job. He’s had a wealth of experience during his first two years, and I’m excited to see where he and his staff take this blog next.

If I could give him (or any future ME) one piece of advice, though, it’d be to remember and appreciate how many opportunities we get on a daily basis. We publish more than 3,000 posts and send out probably twice as many tweets in a year. You’re going to mess up a lot. I certainly have. But you’re also going to do some pretty incredible things.

It’s important to maintain the perspective that no matter what you do, you always have so many more opportunities to make things right and improve. And usually, the next opportunity is right around the corner, so there’s no time to beat yourself up or be sorry. Just keep pushing.

OS: We’ve talked a lot about Onward State, but now let’s switch to Penn State in general. You’re from New Jersey. What made you choose Penn State over that other, lesser Big Ten school closer to home?

AC: Penn State wasn’t on my radar until my senior year of high school. It always seemed too big, and I had always pictured myself following the prototypical path for most Catholic high school students and going to a school like Boston College or Villanova. But on a whim, I went to an info session Penn State was holding in my hometown and the possibilities offered at such a large university excited me. I visited campus a few weeks later and had a new top choice — although it took me until April to get over my Ivy League pipe dreams and make it official.

I grew up about 20 minutes away from a few of Rutgers’ campuses, so I was pretty familiar with it but never gave the school much consideration — although I did apply. The first time I attended a Rutgers football game was actually when Penn State played there my freshman year.

I’d say one major turnoff for Rutgers (other than the quality of its sports) was how spread out the university is across two different towns and a few highways. Luckily, at Penn State, everything you could possibly need is located within walking distance and a one-mile radius, which I consider one of its best parts.

OS: As per Onward State tradition, if you could be a dinosaur, which one would you be and why?

The first time I answered this when I applied to OS, like many, I was lame and unoriginal and said pterodactyl, however, I’ve had a few years to think about this one. I’d go with Rex from Toy Story. That was my favorite movie growing up, and he’s kind of a gentle giant, which I feel like some people (maybe not you, Dana) would describe me as. 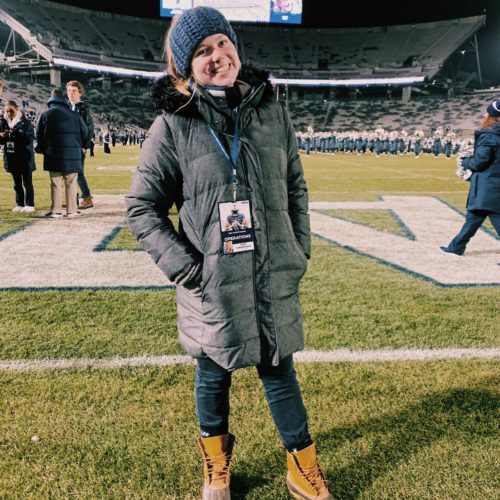 Dana is a redshirt freshman, who is studying public relations. She is from the 570 and her favorite Office quote is "DID I STUTTER". Her passions in life include drinking unsweetened iced tea and spreading her love for agriculture (yee haw)! Ask Dana about storming the field at the 2016 White Out because that was her peak. Send any cow pictures or complaints to dananunemacher@onwardstate.com

Share via
10 Questions With Onward State Managing Editor Anthony Colucci
https://staging.onwardstate.com/2020/05/01/10-questions-with-onward-state-managing-editor-anthony-colucci/
Send this to a friend