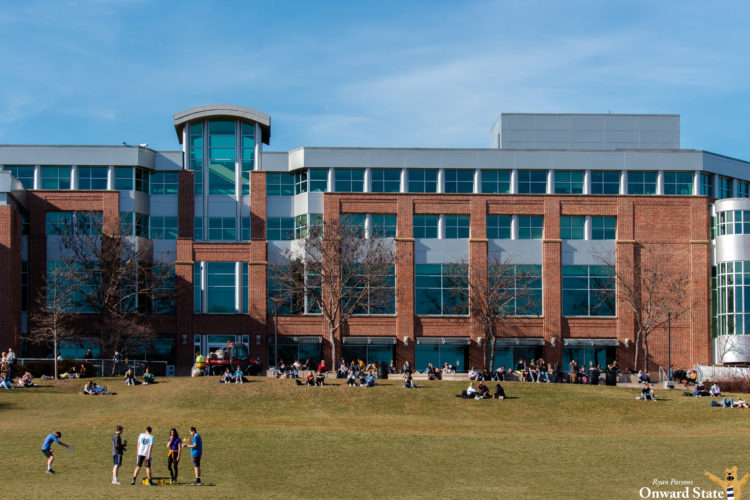 Look, words and names are tough. Often times, it’s better to shorten those long titles into digestible and catch acronyms.

But with so many acronyms at Penn State, things can get confusing sometimes. Hell, some of these buildings could probably use an acronym tune-up anyway.

We took a crack at brainstorming some more appropriate (and entertaining) meanings for our favorite on-campus acronyms.

The HUB is just about everyone’s go-to place for just about everything at Penn State. Need to study? HUB. Grab a bite to eat? Also HUB. Get your iPhone looked at because you dropped it on the sidewalk on your way to class? HUB (soon!). Whether we like it or not, the HUB is easily the most useful and versatile facility on campus.

Well, this one kind of explains itself. The Bryce Jordan Center is where Penn State became a basketball school for, like, two months, where we jump (shoutout to you, Bucks County Bungee Jumpers), and where you can find some of the best chicken baskets on campus. It seems fitting to name such a building after its most popular pastimes.

I’ve never attended a UPUA meeting, but I can tell you for a fact most students don’t know what the hell it stands for. This would honestly be a better start.

Biobehavioral Health must be one of the sexiest buildings on campus. With those floating stairs, that doctor’s office scent, and those windows…Oh, those windows! We’ve decided that when any weather phenomenon happens, the best place to watch it is BBH. Imagine resting up on the fourth floor of the BBH during a hail storm, watching everyone run to the HUB while getting smacked with 4-inch hail. I don’t see how a Tuesday afternoon could get better.

Aside from coronavirus testing, it’s a surefire bet a good chunk of students have headed to University Health Services for an STD test sometime during their Penn State career. First, congrats on the sex. Second, let’s just rename the building to skip the diagnosis and move the process along, OK?

I think the Willard Preacher would certainly approve this change. As he famously says, “If you can’t get laid at Penn State, then you just can’t get laid.”

I am a massive simp for the Office of Physical Plant. The way they cruise around in those slick white vehicles, looking like Papa from Stranger Things is unmatched. Did you know the OPP owns a crane? In summary, the OPP is the best department of Penn State. They are perfect people, who can fix anything. Even the unrenovated East Halls.

CATA – Carrying Anyone To Anywhere

You don’t know true serenity until you’re on a CATABUS cruising through The Village’s retirement homes. Penn State just wouldn’t be Penn State without CATA. It’s always been there for us, always ready to escort us wherever we need to go. Sure, maybe a few of us had a few near-death experiences with one. But all in all, we stan CATA hard. Plus, if you get run over, your tuition might get a little cheaper.

Hey, it’s us! Look, after nearly 12 years of blogging our hearts out, it’s tough not to imagine Onward State is Penn State’s superior student media outlet. Take our word for it, OK?

Share via
Renaming Penn State Buildings With More Fitting Acronyms
https://staging.onwardstate.com/2020/10/23/renaming-penn-state-buildings-with-more-fitting-acronyms/
Send this to a friend