Louis The Child Brings The Heat In THON 2021 Guest Performance 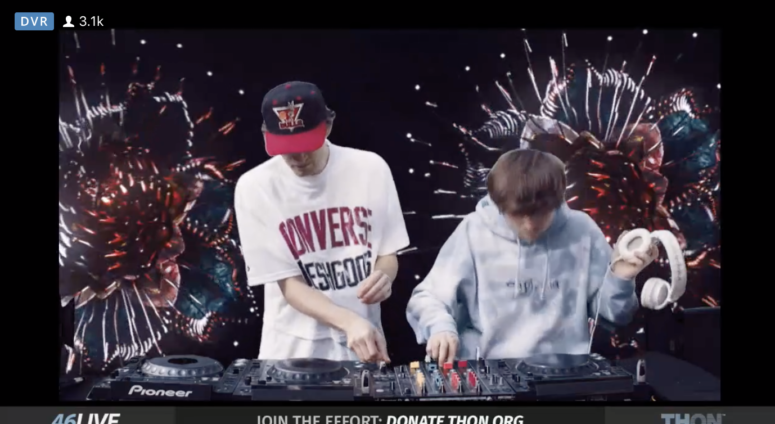 Courtesy of THON
By Otis Lyons

Robby Hauldren and Freddy Kennett make up the EDM duo, born in 1996 and 1997, respectively.

Louis the Child followed the pep rally and yet another line dance to cap off the most high-energy part of the weekend. The dance duo was the second headlining event of THON after Quinn XCII set the tone the previous night.

Louis the Child started their set with the vibey “Lovesick” by Mura Masa. Despite not getting to stunt in the BJC, the duo had some nifty graphics to give the aura of an in-person concert.

Louis the Child then transitioned to one of their own songs, “Shake Something.” The groovy dance vibes continued with a nice shift to DeBarge’s “I Like It.”

They then showed their mixing prowess by playing hit single “Weekend,” a moment that definitely would’ve had the Jordan Center going crazy. When the song reached its climactic drop, they mixed in some alternate beats to the typical floaty, summer tune.

Louis the Child upped the ante with the background game while turning to “Big Love,” another one their own songs.

Seriously, give the special effect teams a raise!

Scottish DJ Hudson Mohawke got some love as “Spruce Illest Bumper” was ~bumped~ next, before they transitioned back to “The Boys Done Did It!” These songs were definitely an increase in energy, and the audience could (probably) feel its blood pressure rising.

Following in the tradition of alternating between their own songs and others’, Louis the Child then played “BREAK LAW” by Dogblood. Doesn’t seem like the most For The Kids song choice, but hey, we aren’t judging!

“All Night” by Chance the Rapper was up next, but guess what? We were due for another song by the hosts, so it was Louis The Child’s remix!

If the energy wasn’t at a fever pitch yet, they reached a climax with “Pink Lady” by Feed Me. This one was a jam that felt like a mix between a frat party rave and a tropical beach jam.

Louis The Child calmed things down by playing the groovy “Girls @,” which is by Joey Purp and features Chance The Rapper. Hauldren and Kennett brought out the synths next for their own “Fade Away.”

If you are a fan of Louis The Child, you surely are well accustomed to Flume. If you’re a fan of both, you’re in luck, because “Jewel” was the next song up.

They began to rev the crowd back up with their signature high-tempo, pulsating drops. Three of the most intense of these songs were “Lavender” by Disclosure & Channel Tres, “hey RAWB” by Louis The Child themselves, and “Yebisah” by Mark Knight.

Louis The Child then brought it back a little more mainstream with their own semi-popular “It’s Strange,” featuring K Flay. Oh, and in case you forgot, the graphics continued to get trippier.

“Utopia” by Dombresky and “The Way You Move” by Outkast followed. Louis The Child put their signature spin on Outkast’s old wave rap song, before transitioning to “Ohhh Baby.”

Louis The Child then gave some love to Ty Dolla $ign, a fellow former Penn State performer, by playing their remix of “Blasé.” This was followed by a remix of Kid Cudi’s “Day N’ Night,” before slowing it all the way down for the chill “Slow Down Love,” “MORPH,” and “Every Color.”

Louis The Child’s remix of “Genghis Khan” by Mike Snow got the infectious vibes back to an elite level. Then, just like we all will do on Monday, “I Had Just Woken Up From A Short Nap” was the penultimate tune.

Hauldren and Kennett capped the hour-long performance with their most popular song (to date), “Better Not.” The breezy, upbeat classic was a great way to finish the festivities.

“Once again, thanks so much for having us,” Hauldren said. “Don’t forget to donate to THON.org. We love you. Have a great rest of your weekend, month, year, life!”

Otis is a sophomore majoring in print journalism and is one of Onward State's associate editors. He lives just north of San Francisco, and is a diehard San Jose Earthquakes fan. Feel free to send over your soccer hot takes to his twitter @otisnlyons1 and instagram @otislyons

Share via
Louis The Child Brings The Heat In THON 2021 Guest Performance
https://staging.onwardstate.com/2021/02/20/louis-the-child-brings-the-heat-in-thon-2021-guest-performance/
Send this to a friend