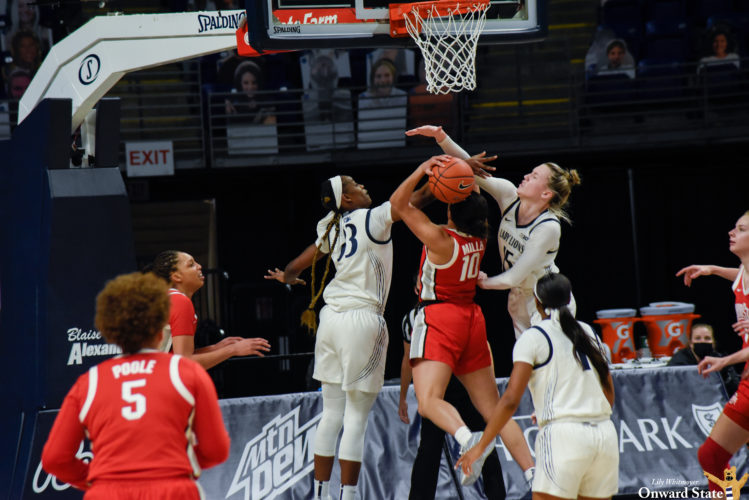 Shay Hagans had a big game, scoring 15 points for the Lady Lions. Johnasia Cash had a double-double with 11 points and 11 rebounds before leaving the game with an injury.

Shay Hagans kicked off the scoring for the Lady Lions by connecting on a floater. Rutgers was able to knock down a three to take the lead, but Johnasia Cash was able to draw a foul on the way to the basket and made one of two free throws.

Penn State was able to get the rebound off of the Cash miss, and she made up for the miss with a basket in the paint. Both teams were playing great defense to start the game, as only five points were scored in the first five minutes of the game.

The Scarlett Knights were able to get a couple of buckets in the paint before Maddie Burke hit a three. That didn’t bother Rutgers, though, as it kept finding some big baskets. It also helped that the Lady Lions kept traveling and turning the ball over.

It was a low-scoring first quarter, but Rutgers had the advantage at the end, 13-8.

Rutgers was the first to score in the second quarter, even though Penn State had multiple opportunities to get some points. Turnovers kept plaguing the Lady Lions, though, and that prevented them from getting into any rhythm.

Tova Sabel was able to get to the free-throw line as well but connected on one of two. She then hit a wide-open three, and suddenly, Penn State was on a roll.

Anna Camden, who had been relatively quiet during the first two quarters, injured her finger after getting it caught in a Rutgers player’s jersey. The Scarlett Knights kept putting the pressure on the Lady Lions, extending the lead to double digits.

Makenna Marisa was able to score her first basket with under 30 seconds left in the second quarter. That would be the last made shot of the first half, and the Lady Lions went into halftime trailing 27-17.

Marisa got the scoring started in the second half with a three-pointer. Hagans and Cash then followed that up with some big buckets in the paint, and Burke was able to get to the free-throw line and make both.

Cash was able to get another basket and Rutgers’ lead was cut down to two. Marisa then drove it in and got a layup to fall, and then Hagans hit a three to take the lead, capitalizing on an 18-3 run in the third quarter.

Rutgers broke that streak after coming out of a timeout, scoring off of a mid-range shot. Hagans then hit another three, only her 11th of the season. Cash was able to get a wide-open layup, and then Marisa hit a wide-open three. The momentum had totally shifted in the third quarter.

The Scarlett Knights started to hit some threes and they were back in the. game. They were also able to hit a last-second shot to retake the lead, and the Lady Lions went into the fourth quarter trailing 42-41.

Marisa hit a mid-range jumper to get the first points of the fourth quarter. Cash was able to get to the free-throw line on the next possession, making both.

Coming off a timeout, Rutgers was able to get a layup to fall to cut Penn State’s lead to one. Then, the Scarlett Knights hit a three to retake the lead.

Camden, who left in the first half with a finger injury, re-entered the game. Unfortunately, Cash rolled her ankle and needed help to walk off of the court.

Rutgers went on a 10-0 run to extend the lead with under three minutes left to go in the game. Hagans was able to get to the free-throw line and make both, but Rutgers responded by making a layup of its own.

Nan Garcia was able to hit a big-time three for her first points of the game. But the Scarlett Knights were also able to hit a very clutch shot to extend the lead.

Garcia hit another significant shot, but Rutgers was able to quickly make one soon after. Hagans responded with a big three that made the contest a one-possession game. It wasn’t enough, though, as Rutgers won 60-55.

The Lady Lions will have another chance to win again against Rutgers when they travel to Piscataway on Tuesday, March 2. The game will tip off at 5:30 p.m. on the Big Ten Network.