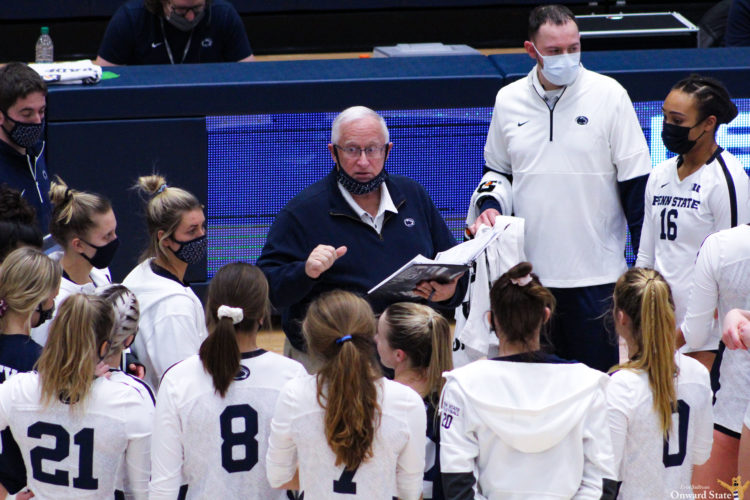 Freshmen stole the show on both sides of the net. Ohio State’s Emily Londot posted a match-high 13 kills, while a pair of Nittany Lions provided Penn State a much-needed spark that helped the team remain competitive.

Ohio State got off to a hot start and jumped out to a quick 5-2 lead thanks to all-around sloppy play on Penn State’s part. Head coach Russ Rose burned an early timeout as the Buckeyes used a 3-0 run to take a 13-7 lead, hitting at an incredible .471 clip at the time.

Despite showing a few signs of life, including a 3-0 run to cut their deficit to five points, the Nittany Lions never took the momentum away from Ohio State. The Buckeyes dominated the first frame and never relinquished the lead they acquired right out the gate, winning the first set 25-18 on a Jenna Hampton service error.

Ohio State (stop us if you’ve heard this before) began the second set strong by posting a scorching 4-0 run. Back-to-back-to-back kills from Kaitlyn Hord, Annie Cate Fitzpatrick, and Jonni Parker stopped the bleeding, putting Penn State just one point behind, 4-3.

Penn State clawed its way back to tie Ohio State 12-12 in the middle of the second frame. Following ties at 14 and 15 apiece, too, a 3-0 Buckeye run prompted a Penn State timeout as the Nittany Lions tailed 18-15. Once that turned into a 6-0 Ohio State run minutes later, Penn State burned another timeout.

The Nittany Lions scored four straight points out of the break, but they weren’t enough to hold off the Buckeyes. Ohio State landed its fourth service ace of the match to win the second set 25-20, taking a 2-0 lead over Penn State.

Penn State took its first lead of the match in the third set thanks to a kill from Holland, putting the team up 3-2 early on. Although the set remained close (neither team led by three points), Ohio State remained in control and won 25-23 thanks to an emphatic kill.

Despite the loss, some Nittany Lions thoroughly impressed throughout the match. Holland racked up eight kills on .615 hitting and two blocks. Anastasiya Kudryashova, meanwhile, led Penn State with 11 kills, while Fitzpatrick posted 10 herself.

Additionally, Gabby Blossom dished out 28 assists and paced the team with eight digs.

Penn State ultimately shot itself in the foot through unforced errors Wednesday night. The Nittany Lions contributed 13 hitting errors and 10 (10!) service errors to give the Buckeyes nearly an entire set’s worth of points.

Although Londot’s a freshman, she sure didn’t look like one Wednesday night. The Buckeye star racked up 13 kills on .423 hitting while contributing two blocks and four digs. She was the lone Ohio State hitter to finish with double-digit kills.

Penn State (4-4) will remain in Happy Valley for a two-match series with Purdue on Friday, March 5, and Saturday, March 6. First serve Friday night is set for 7 p.m.

Share via
No. 10 Penn State Women\'s Volleyball Swept By Unbeaten No. 19 Ohio State
https://staging.onwardstate.com/2021/03/03/no-10-penn-state-womens-volleyball-swept-by-unbeaten-no-19-ohio-state/
Send this to a friend