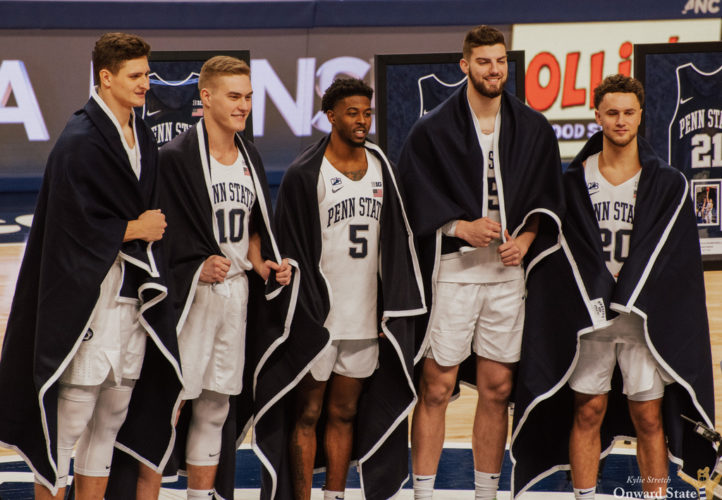 Seniors John Harrar, Jamari Wheeler, and Trent Buttrick had big games in their final home game of their collegiate careers.

Harrar had a double-double, scoring 12 points and bringing in 11 rebounds. Wheeler had 10 points, while Buttrick added a career-high 13 points. Myreon Jones led the way in terms of points, however, adding 17 points to the total.

John Harrar got the scoring started right away after Penn State won the tip, but Minnesota was just as quick with a three. That didn’t stop Harrar, with him getting another basket on the next possession.

The bench was louder than they had been all season cheering on the seniors, with everyone standing up and cheering anytime they did anything positive. It was a fun moment to see to for the first two minutes of the game.

Harrar muscled his way to the free throw line, however he couldn’t capitalize on the free shots and missed them both. After a timeout, Trent Buttrick was able to knock down an open three. Izaiah Brockington followed that up with a midrange jumper going in.

After multiple second chance opportunities, Seth Lundy was able to find the bottom of the net for three. He was able to score again coming out of a timeout.

Brockington got to his midrange spot and scored, and then on the next possession he was able to get open right under the basket to and put up two again.

Buttrick knocked down his second three of the game, ending a scoreless streak for the Nittany Lions. However, Minnesota was catching up in that span. Buttrick extended the lead, though, making one-of-two free throws.

Myles Dread scored a quick basket off of a turnover, taking a hard spill in the process. Thankfully, he didn’t look hurt getting up.

Following a couple made free throws by the Golden Gophers, Lundy was able to drive to the basket and sink a layup. Brockington was able to draw a foul on the defensive end, and he made both free throws.

Penn State was shot out of a cannon coming out of the last media timeout of the half. Myreon Jones scored five points during the run, Harrar and Sessoms added a pair of baskets, and Kyle McCloskey was able to get a score. All of that combined forced Minnesota to burn its second timeout of the game.

Jones was able to sink another three with under a minute left to play in the half. He also drew a foul with five seconds left, and made one-of-two free throws. Dread then got a last-second steal and hit a buzzer-beating three, and Penn State was up 46-28 at the half.

Brockington got the scoring started in the second half with a midrange jump shot, followed by Jones hitting a three. Jamari Wheeler then knocked down his first basket, which was a three.

Wheeler was able to drive into the basket and score again. Following Minnesota making one-of-two free throws, Brockington got to the free throw line and made both of his free throws.

Despite going on a bit of scoring drought, Buttrick hit his third three of the game to spark the offense. Harrar and Wheeler then added two back-to-back baskets in the paint.

Abdou Tsimbila had a massive slam dunk that rocked the Penn State bench. Brockington followed up with a layup at the basket, and the Nittany Lions kept adding to the lead.

The Nittany Lions did go on a scoring drought for a while, but Harrar and Jones broke that with consecutive baskets. Harrar then brought down the house with a slam dunk, similar to that of Tsimbila’s.

If those two dunks weren’t enough, Buttrick decided to add one of his own to the party. It was a fun way to end Senior Night, as Penn State won 84-65.

The Nittany Lions will travel to College Park to play Maryland in the final game of the regular season. The game will tip off at 7 p.m. on Sunday, March 7 and air on the Big Ten Network.