No. 10 Penn State Women’s Volleyball Bounces Back With 3-1 Win Over No. 11 Purdue 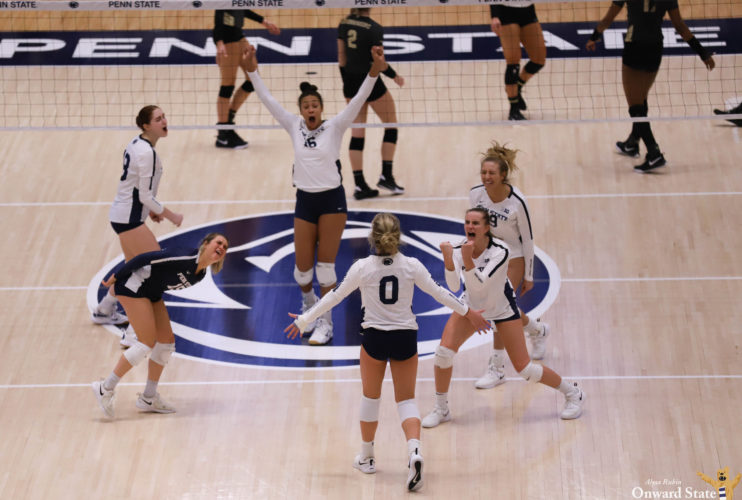 Purdue later caught up to the Nittany Lions, 7-7-, but Penn State responded with two quick points through an ace from Annie Cate Fitzpatrick and a kill from Serena Gray. Another 3-0 Penn State run moments later extended its lead to 13-10. The Nittany Lions took a 15-11 advantage into the first media timeout.

Later on, Purdue called a timeout once Penn State took a 23-17 kill following an emphatic kill from Hord and a Boilermaker attack error. A kill from Fitzpatrick brought up set point, and Parker sent one to the hardwood to finish off the first frame. Penn State won it 25-19 to take a 1-0 lead in the match.

Purdue came out firing in the second game and quickly took a 5-1 lead. Penn State burned its first timeout once the Boilermakers took an 11-5. The Nittany Lions quickly responded with a 3-0 run of their own, which included back-to-back aces from Fitzpatrick, to cut Purdue’s lead to 12-8.

Following a long period of back-and-forth scoring, Purdue erupted on a 4-0 run to bring up set point 24-16. A hitting error Kudryashova gave the Boilermakers the set, 25-16, tying the match 1-1.

Strong serving helped Penn State begin the third frame on a good note. An ace from setter Gabby Blossom gave the Nittany Lions an early 4-2 lead, although Purdue caught up to tie them at four, five, and six points apiece.

Although the teams kept trading blows, Penn State consistently held a small advantage toward the end of the set. Purdue burned a timeout as the Nittany Lions took a 22-19 lead. Back-to-back kills by Fitzpatrick and Gray won Penn State the set 25-21, giving the team a 2-1 lead over Purdue.

Poor hitting from Penn State put the Nittany Lions in a tough position early on in the fourth game. Although the team tied the Boilermakers at 10 and 11 points apiece, a 5-0 Purdue run gave the visitors a notable advantage.

Down 23-19 late in the frame, Penn State stormed back with a 4-0 run to notch things up at 23-23 and force Purdue to take a timeout. An errant Boilermaker swing gave Penn State another point, bringing up match point for the Nittany Lions, 24-23.

Fitzpatrick and Gray combined for an emphatic block to ice the game, giving Penn State the set 25-23 and the match 3-1.

The freshman sensation truly did it all against Purdue Saturday afternoon. On just 38 swings, Fitzpatrick posted 16 kills on .263 hitting and contributed 13 digs, three aces, and two blocks. She recorded her fourth career double-double in the win over the Boilermakers.

The Nittany Lions (5-5) will rest up at home before hosting Rutgers on Friday, March 12. First serve from Rec Hall currently remains up in the air, according to the team.