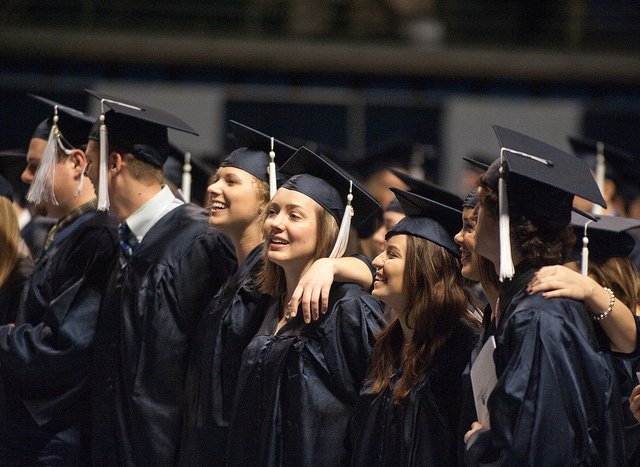 As we approach the end of the academic year, it probably hasn’t escaped most seniors’ attention that we no longer have a built-in senior week before commencement weekend. Instead, graduation ceremonies will take place the weekend immediately following finals.

When former President Spanier announced the change of date for commencement almost two years ago now, he claimed the reasoning behind the switch was to follow suit with other universities in the Big Ten and to save money by closing the dorms and dining commons early. Many students, however, suspected the real reason was to try to eliminate the weeklong party that is senior week. To think it was a contributing factor isn’t unreasonable. Surely it was at least sitting in the backs of the minds of the administrators involved in the decision.

But if it was the primary motivation, it was clearly a futile endeavor. Many seniors (including me) plan to stay after graduation to enjoy a week of relaxing, touring bars and celebrating our achievement. And why shouldn’t we? I’d say most hard-working students have earned a nice little break between the stressful work of school and the grueling labors of a career in the real world. So despite the administration’s best efforts, my friends and I are going to stay that extra week and have a good time doing nothing important.

Clearly Dr. Spanier and the Board of Trustees didn’t think this through, especially when you consider the fact that commencement ceremonies begin Friday night. How do they expect professors to get their grades in that soon? For example, say someone in the College of Engineering or Earth and Mineral Sciences has a final Friday afternoon. Those colleges have their commencement ceremonies at 8 p.m. Friday night. Even if the final is at noon, that gives the professor less than 8 hours to grade the exams of all the seniors in the class. And we all know how long it can take some professors to get final grades in. I’ve waited over a week after finals week to get some final grades in the past.

That begs the question: if someone fails a required class at the last minute, will they still walk at graduation? What’s stopping them from participating in the ceremony if their final grade isn’t calculated on time? I haven’t been able to find the university’s plan for such situations. I’m not saying they don’t have one, but I’d like to know what it is.

Sure, moving commencement weekend might’ve seemed like a good idea at first, but while it might save the university some money on facilities, it also makes things a little more complicated and difficult on professors. And it obviously won’t stop “senior week.” So was it really worth it in the long run?

What do you think about the dates of commencement this year? Let us know in the comments below.

Share via
No Senior Week Creates Logistical Nightmare
https://staging.onwardstate.com/2012/04/19/senior-week-gone/
Send this to a friend