#MusicMonday Rocks You into the Last Month of School 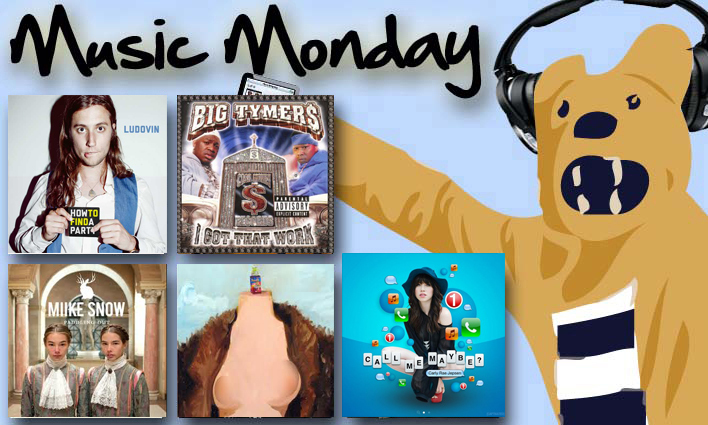 We’ve reached the final stretch of the school year. Most students are frantically finishing the last of their schoolwork for the end of the semester. Seniors are desperately trying to enjoy the end of their college experience and finish off that bucketlist. To help get you through this final month, Music Monday is here to provide some hits to motivate you in whatever you’re doing this April. This week’s selections are brought to you by Melanie Versaw, Dennis McNamara, Alex Robinson, Joe Rogachevsky and Matthew D’Ippolito.

Ludwig Göransson, who many of you may know as the tall guy who plays with Childish Gambino (“I put in work, ask Ludwig”) or the guy who writes the background music for Community, just released an EP titled How to Find a Party under the name Ludovin.  His quirky EP starts with an upbeat song called “If I Die Before You,” then moves to a song where he sings about wishing he was a squirrel (“So Happy“), and he ends with the track “Tricks,” which features Childish Gambino. The lyrics in “Tricks” are very relatable, and even Cousin Skeeter is making a comeback, as Gambino drops a line mentioning Doug’s BFF in the second verse. Gambino’s verse of the song aligns perfectly with Ludovin’s, and I personally cannot wait for more of Ludovin’s work to drop in the future; he has a wonderful voice range and a very distinct style that makes me adore his work. What do you guys think?

This new collaborative track is already making waves. The company that makes the Theraflu cold medicine has made it very clear they are not fans of the song and it has apparently (understandably) ruffled the feathers of Kim Kardashian’s ex. But it just wouldn’t be a Kanye track if it didn’t piss people off. Don’t worry, though. The catchy beat and smooth lines are sure to make you happy.

This song, if you couldn’t tell by the name, is a mashup of “Call Me Maybe” by Carly Rae Jepsen, and “Levels” by Avicii. The first time I heard it, I knew I was in love. This song just makes me want to rage. I just want to put it on repeat for five hours and get completely shitfaced and dance like an asshole. If you haven’t downloaded this yet after giving it a listen, then you are truly insane.

Big Tymers – “Get Your Roll On”

This song isn’t new by any means. Big Tymers get a bad rap for being slow, simple, and incredibly offensive to women. But there’s definitely a calming effect from listening to Mannie Fresh and Baby rhythmically chant out lyrics. “I like… loud pipes/ big rims… mo ice.” These are just a couple of guys who know what they want in life. And all I want is to hear that Mannie Fresh production bang loud enough to register on the Richter scale.

If you haven’t heard of this trio yet, please acqaint yourself with them now. Miike Snow consists of Swedish duo Christian Karlsson and Pontus Winnberg (who produced such megahits as Britney Spears’ “Toxic” under the moniker Bloodshy & Avant) and Manhatten native Andrew Wyatt (who cowrote Bruno Mars’ “Grenade“). Clearly these guys know how to make a pop hit. Their 2010 eponymous debut was, for lack of a better term, awesome, with incredibly catchy tunes like “Animal,” “Song for No One,” and “Black & Blue.” Their new album, Happy to You, was released March 27, and while its music isn’t quite as catchy as the first album, it features some pretty sweet tracks, including one with some vocals from Lykke Li. “Paddling Out” is easily the most memorable track on the album, though “Devil’s Work” gives it a run for its money.

Share via
#MusicMonday Rocks You into the Last Month of School | Onward State | Penn State News, Features, and Opinion by PSU Students
https://staging.onwardstate.com/2012/04/09/musicmonday-rocks-you-into-last-month/
Send this to a friend