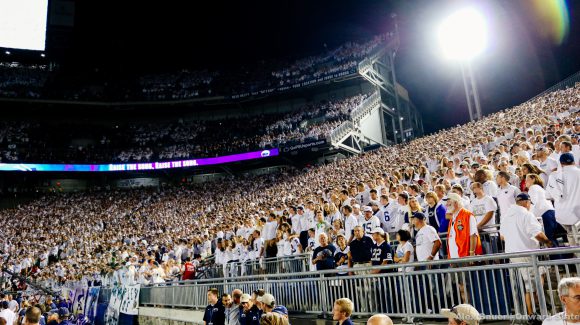 Every year, we all set our alarms for 6:45, maybe even 6:55 if we’re feeling lucky, get on Ticketmaster, and race to buy seven chances to participate in the best student section in the country and cheer on Penn State football. Every year for the last four decades the Student Section has sold out, and 2016 was no different.

Penn State Athletics definitively announced that the 21,200-ticket allotment of student section tickets sold out across the four-day sale, with particularly strong efforts from the junior and sophomore classes, which both sold out in less than an hour. The sophomores’ tickets went the fastest, selling out 10 minutes faster than the juniors.

Will there be 21,000 students packed into the south end zone for all seven home games? Absolutely not, but you can expect a full end zone for at least the White Out game versus Ohio State and potentially the Stripe Out versus Temple (although the latter’s noon kickoff doesn’t help). Because of the student ticket sellout, Penn State Football will boast a 107k sellout even if the student section is empty because technically every ticket was sold. Last year’s miserable game against Army saw a depleted student section but Beaver Stadium advertised a sellout.

If you weren’t able to get your hands on season tickets, you can always play the game of the student ticket exchange in the week leading up to the game. Depending on the game’s popularity, tickets could be anywhere from $10 to $70, but for popular games like Ohio State they probably won’t allow any student to have more than one ticket on their ID. You can also get any other student to transfer you a ticket either for free or you pay them under the table and the various “Penn State Class of ___” Facebook groups are a good place to check in the week leading up to the game if you’re in the market for a ticket.

Regardless, the most stressful morning of a Penn Stater’s summer is behind us. If this is your first year in the student section, you’re in for a treat and the best atmosphere in college football. We’ll see you on September 3 at Gate A.

Share via
Student Section Tickets Again Sell Out During Four-Day Sale
https://staging.onwardstate.com/2016/06/24/student-section-tickets-again-sell-out-during-four-day-sale/
Send this to a friend