Homecoming To Replace King And Queen With Gender-Neutral Court 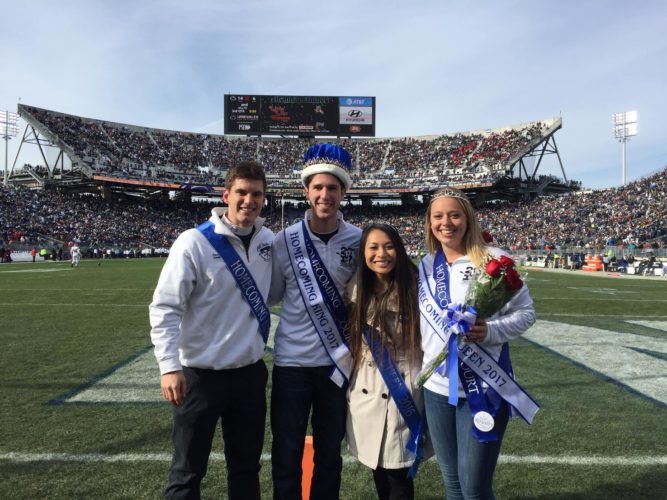 Penn State Homecoming announced this morning that it will officially do away with Homecoming King and Queen in favor of a gender-neutral court. Instead of the traditional award, Homecoming will now crown two “Guide State Forward” award winners, reflecting this year’s Homecoming theme.

Much like in the past, students will nominate rising seniors who they think are worthy of recognition and the Homecoming captains will narrow that pool down to 20, which it will then interview and select 10 people for the student court, seemingly without regard to gender or gender identity. Students will then vote on the top-five finalists and a panel of faculty and staff will select the two winners. The award will go to two individuals, regardless of gender, who exemplify Penn State’s core values of service, leadership, and academics, according to Homecoming 2018 Executive Director Ally Berdan.

“We’re striving to open up Homecoming so that all Penn State students can feel like they are welcome and able to participate. Our goal is to identify the best students to represent Penn State without regard to their gender, gender identity, or gender expression,” Berdan said in a release. “This change is not only in line with our organization’s desire to be accepting of all students, but also the University’s values of diversity and inclusion, as reflected in the All In initiative.”

Alex Shockley and Cayla Castells, who were crowned in the fall, will be the last Penn State Homecoming King and Queen, respectively. The award recipients will still be announced at the Homecoming football game and the court will still participate in various events during Homecoming week. In addition, this year’s court will also be responsible for planning a University-wide service event.

With this, Penn State will become only the third school in the Big Ten to do away with the “king” and “queen” titles. Nominations for student court open today and will open again in August for a second period.

Share via
Homecoming To Replace King And Queen With Gender-Neutral Court
https://staging.onwardstate.com/2018/04/10/homecoming-replace-king-queen-gender-neutral-court/
Send this to a friend