Miles Sanders To Wear Familiar No. 26 For Philadelphia Eagles 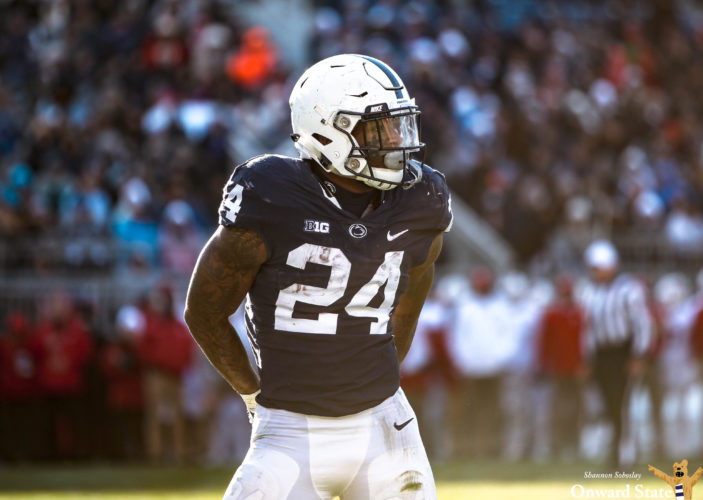 Someone must’ve told Miles Sanders that No. 26 is a great number for running backs to wear.

He will wear Saquon Barkley’s signature No. 26 when he suits up for the Philadelphia Eagles this year.

The team also announced that Shareef Miller, who also signed with Philadelphia Thursday, will wear No. 76 for the Eagles.

Numbers aren’t the only thing the two Penn State alums will share. Both Sanders and Barkley wound up in the NFC East after the Eagles selected the former in the second round of the NFL Draft. The pair will play against each other at least twice per season for the foreseeable future.

The two division rivals won’t meet until week 14 of the 2019 season. The Eagles and Giants’ first meeting of the season will be played on Monday Night Football in Philadelphia before they wrap up the regular season against each other at MetLife Stadium on December 29.

Sanders totaled 1,274 yards and nine touchdowns in his only season as a full-time starter in 2018, while Barkley rushed for 1,307 yards and totaled 15 touchdowns in his first NFL season. The pair worked closely at Penn State with Barkley serving as a mentor to Sanders while he waiting in the wings in 2016 and 2017.

If No. 26 treats Sanders anywhere near as well as it has treated Barkley throughout his football career, we’re in for quite a rivalry.

Editor’s Note: The original headline of this post referenced Miles Sanders’ jersey number as being “Saquon Barkley’s No. 26.” Many of our readers interpreted this as being disrespectful to Sanders. We understand that Barkley doesn’t own the number. We didn’t intend to belittle Sanders or his many accomplishments in any way and apologize for the misleading wording. We are excited to watch both players continue their careers professionally and against each other twice a year on division rivals and while wearing the same number.

Share via
Miles Sanders To Wear Familiar No. 26 For Philadelphia Eagles
https://staging.onwardstate.com/2019/05/09/miles-sanders-to-wear-no-26-for-philadelphia-eagles/
Send this to a friend