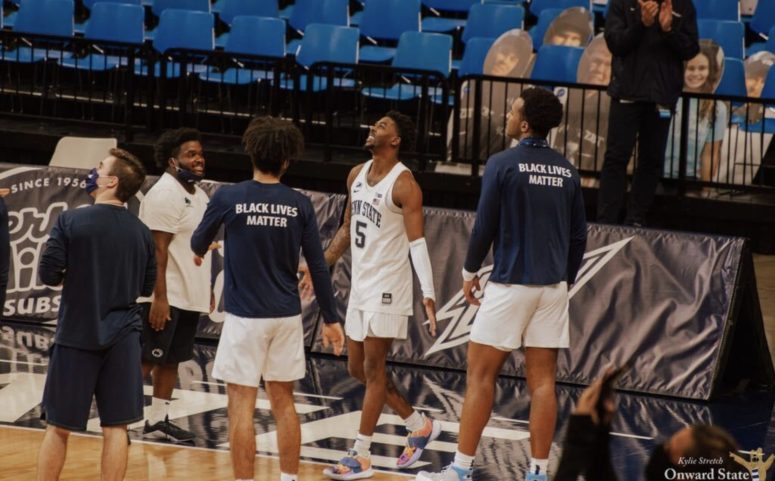 Senior night is always an emotional experience for any team, and after 30 years in college basketball, interim head coach Jim Ferry is no stranger to what saying goodbye to his veterans is like.

“I’ve spoken so highly of the seniors and the leaders of this group,” Ferry said Tuesday. “It’s always an emotional day, an emotional time. We’re really gonna do our best to honor these guys, and hopefully play really well for them.”

The Nittany Lions certainly didn’t disappoint in honoring their leaders. Penn State stomped on Minnesota with an impressive 84-65 victory Wednesday, which included strong offensive performances from just about every corner of the roster.

Myreon Jones led the way with 17 points, while seniors John Harrar and Jamari Wheeler both had solid nights. The King of Delco put up yet another double-double, with 12 points and 11 boards, while Wheeler added 10 points of his own and five assists.

Those two seniors have gotten plenty of shine all season, but three others were also honored Wednesday night. Trent Buttrick, Kyle McCloskey, and Taylor Nussbaum all got a chance to start the first few minutes of the contest and finished out the last moments on the court together.

Aside from starting, the first of that trio had a career-night to finish off his days at the BJC, as Buttrick scored 13 points and added an impressive seven rebounds.

“It’s not just [John and Jamari], Trent Buttrick, who really didn’t play a lot in his career, has stepped in and played some big minutes for us,” Ferry said. “Taylor Nussbaum, a walk-on, has stayed with it all the way through. Kyle McCloskey, what he brings to our team everyday is what makes us good.

“You’re talking about five guys that are really, really special, and left a major impact on our program,” Ferry added.

There’s no doubt the Nittany Lions have needed leaders this season. Several key members of the group voiced their displeasure after Pat Chambers was asked to step down as the program’s head coach, and Jim Ferry was forced to step in as the interim head coach.

Considering where this team stood just a few months ago, this year’s successes shouldn’t be scoffed at. While he wasn’t the head coach during the majority of their tenure at Penn State, Ferry’s strong relationship with each of his seniors has been on display all year.

The interim head coach explained he’s known Wheeler since he was 16, and has been proud to watch a guy like Harrar grow into a dominant big man over the last four years.

Penn State’s NCAA Tournament chances may be hanging on by a thread at the moment, but this group of seniors is still extremely proud of what they’ve accomplished.

“We came in with our heads in the right spot. We knew what we wanted to do,” Wheeler said. “We wanted to come here and change the program around, turn it into a winning program. Every senior that I came in with are all winners, and that’s the only thing we care about. It feels great that we had this opportunity to do that.”

Aside from leaving it all on the floor to help develop a winning tradition, there’s a few traits that stands out to Ferry when considering this senior class.

These Nittany Lions will have a few more chances to play for each other, as this season isn’t quite yet wrapped up. They’ll finish the regular season with a trip to Maryland at 7 p.m. this Sunday on BTN, and from there will likely need a deep Big Ten Tournament run for any bid at the Big Dance.

Either way, Ferry’s confidence in his seniors and team as a whole remains down the stretch.

“Right now it’s about playing your best basketball,” Ferry said. “We gotta go into [Maryland] and prepare for those guys. Hopefully we continue to play well going into the tournament. In my coaching career, my teams usually play their best basketball late. I know everybody says they want to, but we’ve done that.”

Share via
Penn State Hoops Honors Five Seniors With Perfect Sendoff Over Minnesota
https://staging.onwardstate.com/2021/03/04/penn-state-hoops-honors-five-seniors-with-perfect-sendoff-over-minnesota/
Send this to a friend