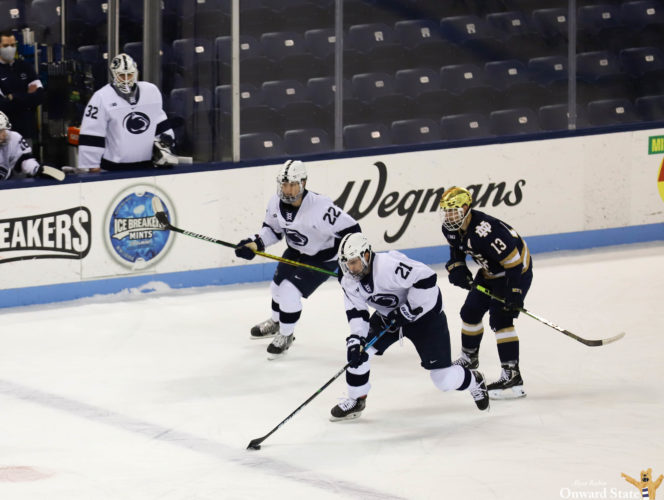 The third period saw Notre Dame score three goals, and the Nittany Lions weren’t able to close the gap or even the score.

Mason Snell scored the Nittany Lion’s sole two goals, his first two of the season, showing yet again that every player on the team is able to make an impact.

Last playing January 29 due to COVID outbreaks within the program, the Nittany Lions came out strong against Notre Dame Friday evening.

Snell opened the scoring for the Nittany Lions 2:41 into the first period, shooting a rocket from the blue line, his first goal of the season.

Under two minutes later, Notre Dame’s Landon Slaggert responded to the Nittany Lions goal, tying the game 1-1 under five minutes into the period.

Halfway into the period, both teams were continuing to play fast-paced hockey. While the Nittany Lions had a number of good scoring chances, nothing came to fruition.

Fast-paced, back and forth hockey continued for the remaining half of the frame, and the first period ended 1-1.

The second period started off with the same level of energy from the frame prior. The Nittany Lions played strong, and had many opportunities to get the puck on Notre Dame’s net.

Under three minutes into the period, Chase McLane was then knocked into the boards by a Notre Dame player near the Nittany Lions bench. The freshman then headed down the tunnel into the locker room, but returned to the game before the halfway mark.

The back and forth hockey continued, with both teams getting a flurry of scoring opportunities, neither able to get pucks in net.

Paul DeNaples really hustled during the second frame, keeping the Fighting Irish out of the the Nittany Lion’s zone, making some great defensive plays to keep the score tied.

Halfway through the second frame, Penn State took a 2-1 lead with a goal from Snell. Doherty passed the puck to Snell, Snell shot the puck towards the net, and then Sarlo knocked the puck into St. Cyr’s net.

Less than 30 seconds later, Notre Dame made it a tie game again, with Matt Steeves finding the back of Oskar Autio’s net.

The Nittany Lions concentrated on getting the puck into St. Cyr’s net to gain the lead once more, but weren’t able to score. The Fighting Irish then attempted to gain the lead, but the defensive squad and Autio kept it a 2-2 game.

The first penalty was called 15:36 into the second frame of the contest, and Penn State went on the man advantage for the first time due to a hooking call on Notre Dame’s Nate Clurman.

Autio made some fantastic saves, keeping the game tied. Penn State kept the puck out of the defensive zone, and the Nittany Lions killed the man advantage with ease as the second frame ended.

The third frame started with the Nittany Lions killing off the remaining 11 seconds of the Notre Dame man advantage.

As with the prior two periods, the Nittany Lions played a back and forth game with the Fighting Irish to kick off the period.

3:24 into the final frame, Notre Dame took the lead, with Max Ellis giving the Fighting Irish a 3-2 lead.

After an unrelenting few minutes of pressure from Notre Dame, Zach Plucinski gave the Fighting Irish a 4-2 lead 7:29 minutes into the period. Down by two, the Nittany Lions needed to find a way to settle the puck down and get back in the game.

With exactly five minutes remaining in the final frame, Notre Dame’s Clurman upped the Fighting Irish’s lead to three, with a puck bouncing over Autio and into the Nittany Lions net.

The Nittany Lions will face the Fighting Irish again Saturday night to close out the series at 5:30 p.m. at the University of Notre Dame. It is the program’s last regular-season showdown of the 2020-2021 season. 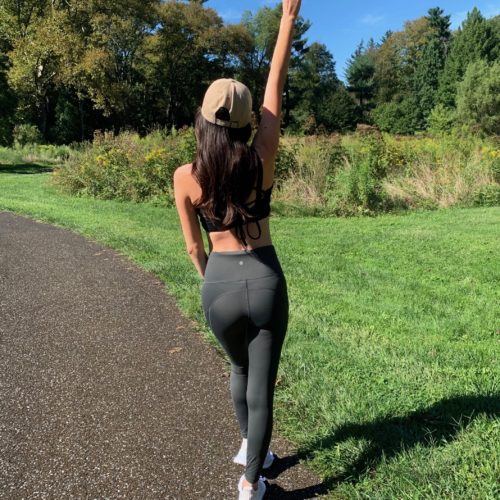 Acacia is a junior from Philadelphia majoring in digital and print journalism with a sports certificate. Although she considers herself a Philadelphian at heart, she is a Toronto and Seattle sports fan. Follow her on Twitter @acaciaaster or Instagram @acaciaastr for hockey takes and mediocre analysis.

Share via
Penn State Men\'s Hockey Falls 5-2 To Notre Dame After Extended Break
https://staging.onwardstate.com/2021/03/05/penn-state-mens-hockey-falls-5-2-to-notre-dame-after-extended-break/
Send this to a friend