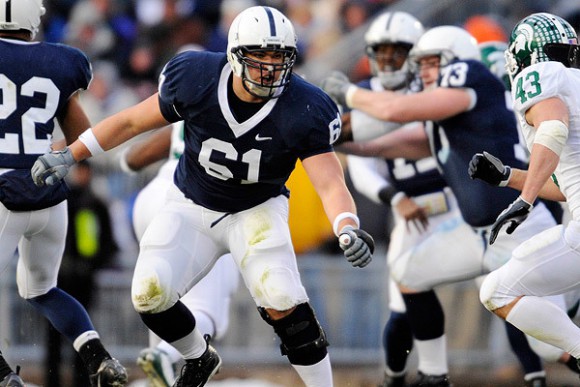 Former Penn State offensive lineman Stefen Wisniewski was taken 48th in the NFL Draft on Friday by the Oakland Raiders. Wisniewski will now try to follow up an illustrious four years at Penn State with a career in the National Football League.

Wisniewski is a versatile offensive lineman, having played both center and right guard. He was one of only six players to start all 13 games for the Nittany Lions last season. Under his leadership, Penn State gave up only 12 sacks last season, which was 14th-best nationally. His play led to first team All-American recognition last season.

Wisniewski’s father, Leo, and his uncle, Steve, both played at Penn State as well. He may have had good genes that led to being successful at football, but he did extremely well in the classroom as well, graduating with a 3.91 grade-point average.

I grew up in a Philly suburb, then moved to a different one. I am now at Penn State, where I can actually sate my giant appetite for sports. Other than writing, I also play the cello in the Penn State Philharmonic.

Share via
Stefen Wisniewski Taken 48th in NFL Draft by Oakland
https://staging.onwardstate.com/2011/04/29/stefen-wisniewski-taken-48th-in-nfl-draft/
Send this to a friend