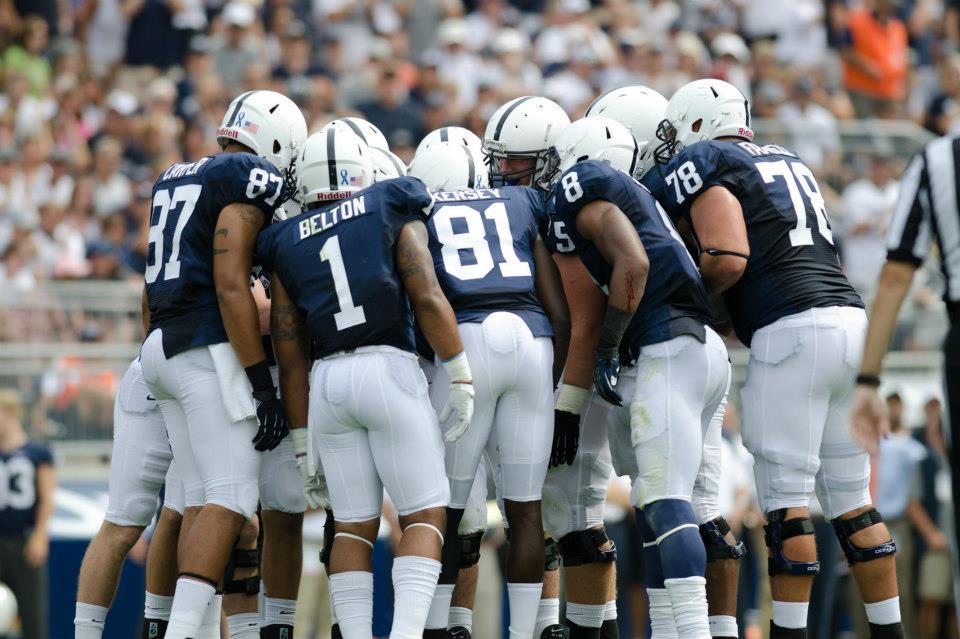 The Penn State Nittany Lions (2-2) and the Illinois Fighting Illini (2-2) head into tomorrow’s game at Memorial Stadium with identical records. Aside from that, the two teams don’t have much in common.

The Nittany Lions enter Big Ten play with some momentum after two consecutive victories. On the other hand, the Illini are trying to recover from a shocking twenty eight point home loss to Louisiana Tech last Saturday, in which they surrendered fifty two points. Through four games, Penn State has surrendered a total of sixty one points.

The Illini have 3 more rushing touchdowns and 83 more total rushing yards than the Nittany Lions, but Penn State bests them in passing yards by over two hundred. Part of this has to do with a much different quarterback situation. Matt McGloin is the unquestioned starter for the blue and white while Illinois has used three different quarterbacks through four games.

Perhaps one similarity between the two squads is that both are led by first year head coaches. Following NCAA sanctions in July, Tim Beckman attempted to take advantage of the open recruiting season by sending assistant coaches to State College with the hopes of poaching some Penn State players. He came away with reserve offensive lineman Ryan Nowicki and pissed a lot of people off in the process, most notably Michael Mauti. Beckman does not regret the decision, and Bill O’Brien is not really in the mood to talk about it. “I believe our players our committed to this program. As far as the recruitment of our players, that’s something I’m going to keep to myself,” said O’Brien when pressed about the issue at his weekly Tuesday press conference.

While memories of last year’s last-minute 10-7 Penn State victory at Beaver Stadium are etched in the minds of many, the teams and coaching staff are much different. Gone are the days of A.J. Jenkins, Derek Dimke, Derek Moye, and Silas Redd who all had important roles within the final few minutes of that contest.

A few players to know about on this year’s Illinois team:

Nathan Scheelhaase #2 — The Penn State defense has seen the junior quarterback twice before, but his job appears to be on shaky ground. Scheelhaase can beat teams with his arms and legs but has not done much of either this year, missing two games with an ankle injury and playing inconsistently when healthy. Beckman gave him a vote of confidence earlier in the week. He is expected to start tomorrow. Whether or not he finishes the game is a different question.

Reilly O’Toole #4 — If Scheelhaase gets pulled at any point, expect O’Toole to be the next guy up at quarterback. The sophomore played a few series last year against the Nittany Lions. While most of his numbers came against lowly Charleston Southern, he has six passing touchdowns so far and a 78.1 completion percentage.

Ryan Lankford #12 —  Lankford’s numbers do not measure up to those of Allen Robinson, but the junior receiver is off to a strong start. With three touchdowns over his past two games, he will be a good test for the Penn State secondary regardless of who ends up throwing to him.

Michael Buchanan #99 — This Illini defensive line is strong, and Buchanan is the big play-maker on it with two sacks and an interception so far. McGloin has only been sacked twice all season so far. Buchanan hopes to change that.

Jonathan Brown #45 — The Nittany Lions have done a good job taking care of the ball so far. Tomorrow, they will face a play-making linebacker who already has a sack and fumble recovery this season.

A few things to watch for from the Penn State side:

Return of the Running Backs — Bill Belton, Derek Day, and Curtis Dukes will be ready to go tomorrow. Who steps up in a crowded backfield, and does one of them finally score a rushing touchdown?

Defensive Line Rotation — Sean Stanley should be back after missing last week’s contest with a back injury. How much time do C.J. Olaniyan and Anthony Zettel see after being effective in limited opportunities?

Michael Zordich — The senior fullback received the most carries of his career the last two weeks. He wants the ball. Does O’Brien give it to him with a healthy stable of running backs?

Who covers Ryan Lankford? — This will be a test for the Nittany Lions secondary as Lankford has four touchdowns so far. Adrian Amos should be the ideal guy here in what will be a good test for the secondary.

The Nittany Lions are playing better and more consistent football than the Illini, but things are far from a guarantee in a Big Ten away game. With that said, they have the better quarterback and a better defense on paper. If they take care of the football and cut down on the one hundred penalty yards from last week, they should have every opportunity to leave Champaign with a three game winning streak in hand.

By the Numbers: Penn State has not allowed a first quarter point all season so far. Illinois has thirty of them. It will be rather impressive if the Nittany Lions can keep this accomplishment going through the beginning of conference play.

Blast from the Past: Illinois last hosted Penn State in 2009. Stephfon Green set the tone for a 35-17 victory with a fifty two yard rushing touchdown. This year’s ground attack would be impressed. The longest run so far is a nineteen yard scamper by linebacker Glenn Carson on a fake punt.

Share via
Nittany Lions Head to Champaign with Momemtum
https://staging.onwardstate.com/2012/09/28/nittany-lions-head-to-champaign-with-momemtum/
Send this to a friend