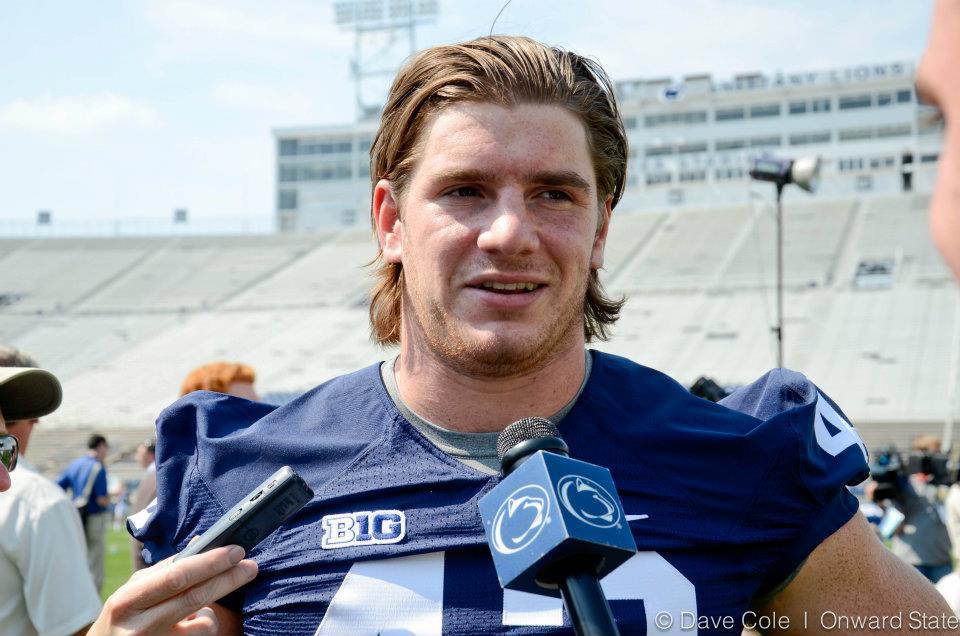 There was little doubt in anyone’s mind that Michael Mauti was going to have a great game today.

Anyone who did not believe it realized their mistake less than ninety seconds into the contest, as the senior linebacker forced Tommy Davis to fumble a punt, which long snapper Michael Fuhrman recovered. Three minutes later, the Nittany Lions took advantage of the turnover as Zack Zwinak scored on a one yard touchdown. The Penn State Nittany Lions (3-2, 1-0 Big Ten) were off to a 7-0 lead and never looked back defeating the Illinois Fighting Illini (2-3, 0-1 Big Ten) 35-7.

The Nittany Lions scored another touchdown on their next drive as Matt McGloin quarterback sneaked his way into the end zone. Later in the second quarter, McGloin found Matt Lehman over the middle for a 21 yard touchdown to take a 21-0 lead. Lehman took a brutal helmet-to-helmet hit on the play that would result in an ejection for Earnest Thomas III, which just added fuel to the fire for this Penn State squad looking for revenge.

Illinois quarterback Nathan Scheelhaase attempted to drive the Illini down the field to erase the shutout before halftime. Facing 4th and goal from the four yard line with 19 seconds remaining, Illinois coach Tim Beckman decided his team needed a touchdown. Get in the end zone, and all of a sudden it’s a two possession game going into halftime with his team receiving the second half kickoff.

He did not plan for Mauti to step in front of a Scheelhaase pass and return it 99 yards to the Illinois one yard line. The Illini avoided further disaster as a Sam Ficken field goal attempt was blocked to close out the half, but Mauti’s presence had been felt, and it did not stop there.

Mauti went on to play a strong second half as he again intercepted Scheelhaase late in the third quarter. The story surrounding Mauti and Illinois is well known. He made it clear that he did not approve of Tim Beckman sending assistant coaches to State College to recruit players following the July sanctions. He backed his words up today. “We never forgot about what happened in the summer. We had it in the back of our minds. It was sweet,” said Mauti.

Given Mauti’s talent, no one should be surprised, but did they really expect a historic day that set the record for both the longest interception return in Penn State history and the longest one in Memorial Stadium history? “That performance today was amazing. We knew that he had that potential. We knew that he was that type of player. He was just waiting to do that,” said DT Jordan Hill.

Bill O’Brien and Ted Roof were not surprised either. Both spoke about the strength and leadership of the senior class and Mauti’s enormous contributions. “Anytime you have things to say, it’s very important to go out there and back it up,” said O’Brien.

Mauti stole the show, but he was not the only linebacker to play a strong game. Glenn Carson and Gerald Hodges led the way with 9 tackles while Michael Yancich chipped in 7. The Illini where held to 74 rushing yards on 22 carries and resorted to a trick play to score. Scheelhaase tossed a lateral to Josh Ferguson who then found Spencer Harris open for a touchdown early in the third quarter.

For much of the day, the Nittany Lions didn’t play particularly great football. There were two missed field goals by Sam Ficken and a fumbled snap by McGloin, but they were far superior to Beckman’s squad which looked unprepared from the start, committing several key penalties and mental mistakes. The Nittany Lions have some issues to iron out including the kicking game, but they took advantage of several Illinois miscues.

After a disappointing beginning to the season, the Nittany Lions all of a sudden are on a three game winning streak and have some life in a Leaders Division that is wide open for the taking.

Win or lose, sports require short-term memory. McGloin said as much after the game. “We have to get ready for a tough [undefeated] Northwestern team.”

Still, today’s victory and Mauti’s performance will not be forgotten anytime soon.

Share via
Michael Mauti Makes a Statement in 35-7 Victory Over Illinois
https://staging.onwardstate.com/2012/09/29/michael-mauti-makes-a-statement-in-35-7-victory-over-illinois/
Send this to a friend