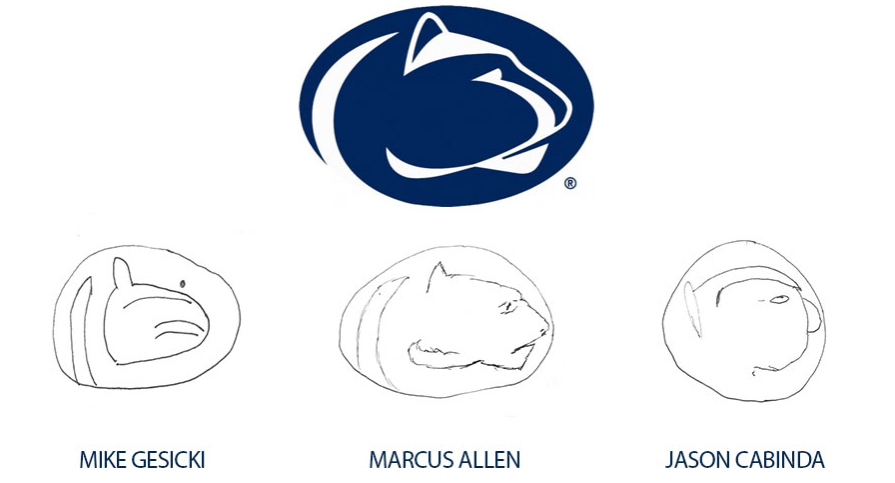 While most of the discussion between reporters and players concerned on-field expectations for the coming season, Andrew Lind of Eleven Warriors offered the players a unique challenge. He asked each team’s trio to draw their school’s logo from memory. Gesicki, Allen, and Cabinda showed off their artistic skills (or lack thereof) and tried to recreate Penn State’s iconic “chipmunk” logo. The Manahawkin, N.J., native gets us off to a good start with his drawing, but it’s definitely far from perfect. While Gesicki has gotten the shape and the curved line in the bottom-left part of the logo right, there are clearly flaws in other parts of the logo.

The Nittany Lion’s face is nowhere to be found in this drawing, with random curved lines replacing the mouth and nose. The ears are decent, but they aren’t pointy enough, leaving a lot of room for improvement. Overall, Gesicki incorporates key details of the logo well in his drawing, but the flaws are too difficult to overlook. I’ll be honest, when I read “football players draw their team’s logo,” I wasn’t expecting much. Enter Marcus Allen, who exceeded every expectation I had for these drawings, and then some.

While most Penn Staters would prefer that Allen sticks to blocking field goals, he could retire from football right now and launch an art career with no problems. This logo is easily the best of the three, clearly including most of the key details of the logo.

My only gripes with this drawing are minor; the ears may be a bit too pointy, and the curved line just under the eye is missing, but this is an excellent effort from Penn State’s star safety. Look, I get it. These guys aren’t artists. I won’t be too hard on Cabinda because, honestly, my drawing of the logo would be just as awful. With that being said, this is by far the worst effort of the three, and almost none of the key details are correctly depicted here.

Fortunately, Cabinda is much better at tackling opposing tailbacks than he is at drawing Penn State’s logo, which is clearly the more important skill for James Franklin’s squad in 2017. As the team’s defensive captain, communications skills are a must. Who cares if he’s good at drawing?

Penn State’s players were a bit unlucky with this challenge, as their logo is probably the conference’s most difficult to draw. Nine of the other 13 Big Ten logos are just one letter.

For the most part, they did well with this task, and Marcus Allen carried the group with his strong performance. Unfortunately, Cabinda’s drawing hurts the team’s overall score, which gets a respectable C+.

In the most upsetting turn of events, Mikey graduated from Penn State with a digital & print journalism degree in the spring of 2020. He covered Penn State football and served as an editor for Onward State from 2018 until his graduation. Mikey is from Bedminster, New Jersey, so naturally, he spends lots of time yelling about all the best things his home state has to offer. Mikey also loves to play golf, but he sucks at it because golf is really hard. If you, for some reason, feel compelled to see what Mikey has to say on the internet, follow him on Twitter @Mikey_Mandarino. You can also get in touch with Mikey via his big-boy email address: michael.p.mandarino@gmail.com