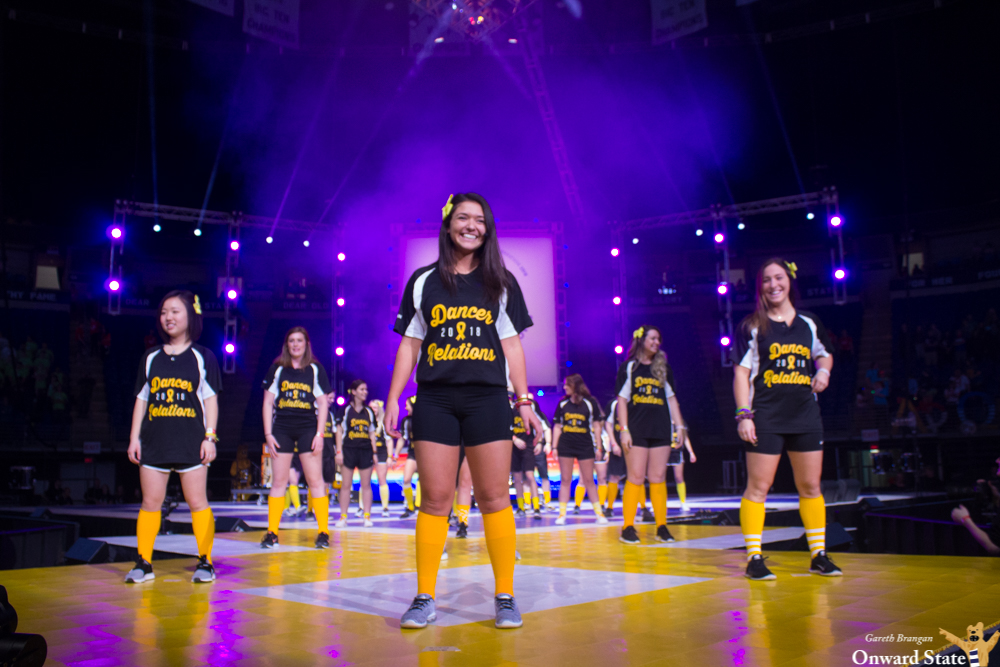 The past 365 days have made up quite the year for Penn State, and this year’s line dance lyrics certainly reflect that.

By the time you hear the 46th iteration of “Dancer Relations Captains, to the stage!” you’ll probably have most if not all of the lyrics memorized. But will you know what they all mean?

THON’s Dancer Relations captains find a way to pack as many clever references as possible into each line dance, so we broke down the lines “Genius Lyrics”-style to help you keep track of it all.

ESPN brought College GameDay to Happy Valley for the first time since 2009 this season — and aired live from Old Main lawn before Penn State’s White Out win over Michigan. A few weeks later it was announced the Symbol of Our Best would join the Mascot Hall of Fame.

The Nittany Lions kept their undefeated record in the Fiesta Bowl with a win over Washington, while the 2016-2017 hockey team won the program’s first Big Ten Championship.

Climb with us, new rock wall / Working out is free for all

Penn State men’s basketball is #climbin and you should be too — on the IM Building’s new rock wall. The Student Fee Board voted last spring to fully fund Campus Recreation’s request, effectively eliminating the optional fitness membership fee.

This year’s massive Rockefeller Center Christmas tree was cut out of our own backyard, bringing a little Happy Valley to the Big Apple. And, in a fun surprise, THON paid homage to alumni (and student) efforts to #SaveTheSkeller when Herlocher Foods announced it would be closing the bar.

Endowment to communications / We are! Across the nation

Review the last year at Penn State and this year's Line Dance lyrics.https://t.co/HFjEzh1mfU

There was unfortunately no shortage of natural disasters this year, from floods to wildfires to hurricanes. As such, there were a plethora of efforts from around the world for people to give back by donating time, food, goods, or blood (see below)

After the horrific shooting in Las Vegas, thousands of people lined up to donate blood to do what they could to help those that had been injured in the attack.

Watch eclipse — wait! — glasses on / Prince engaged across the pond

The solar eclipse in August brought us all outside to stare directly at the sun. Most of us, fortunately, were smart enough to wear eclipse glasses. Over in England, Prince Harry proposed to Meghan Markle to add another line to the Royal Family.

Bitcoin make it rain / Phelps and shark, stay in your lane

Mine Bitcoin in your dorm, and sing about it in the line dance! Also, Michael Phelps was in last year’s line dance for his success at the 2016 summer Olympics and this year’s for that time he swam a “race” against a “shark.”

Touchdown, celebrate / If only Browns could relate

The Cleveland Browns did not win a single football game this past season. O-H-I-no, amiright?

Big Philly section of the line dance here, paying homage to the Eagles first ever Super Bowl win, the Sixers recent success in #TTP and, uh, Pittsburgh won too.

Alexa, noted Penn State fan, came into homes across the world to make life a little easier and fun. In the Apple-sphere, iPhones glitched out and forced you to send “! [?]” instead of “I.”

Fidget spinners all the craze / Vine has seen better days

I really though fidget spinners have been around longer than 12 months but I guess not. And though we were all excited to see the resurgence of Vine after it was slated to be cancelled for good, Vine 2 hasn’t lived up to the expectations.

Warren Beatty slipped up at the Oscars last year, reading the wrong winner for best picture — “La La Land” instead of the real winner “Moonlight.” People were not happy about it. Donald Trump said “fake news” a lot. Etc.

Cans retire, Dash is here / Hundred days, far and near

THON 2018 is the last one that will include money raised by canning. Fortunately, Dash is here to (hopefully) fix the problems that plagued the PASS system.

Share via
‘Genius Lyrics’ Breakdown Of The THON 2018 Line Dance
https://staging.onwardstate.com/2018/02/16/genius-lyrics-breakdown-thon-2018-line-dance/
Send this to a friend