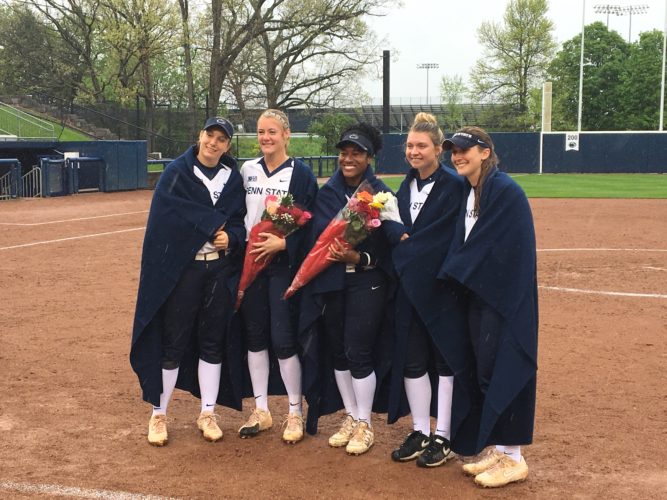 Penn State softball (24-31, 7-16 Big Ten) fell in the first two games of its rain-impacted series against Indiana, but managed to earn a win on senior day at Beard Field thanks to a three-hit effort from freshman pitcher Bailey Parshall.

The Hoosiers (35-20, 10-13 Big Ten) will face the Nittany Lions again in the Big Ten tournament on Thursday after both teams clinched their seedings over the weekend.

Penn State’s Bailey Parshall and Indiana’s Tara Trainer got into a pitching duel on Friday that extended into Saturday after a rain delay. The two teams were scoreless with two hits each through four innings as a storm rolled through that forced play to continue on Saturday afternoon.

The Hoosiers broke through in the sixth with a bases-loaded walk and an RBI single from Annika Baez to make it 2-0, and Trainer closed out the complete game win by stranding runners in scoring position in the final two innings.

Indiana wasted no time in the second game on Saturday — scoring five runs off five hits, including home runs from Maddie Westmoreland and Grayson Radcliffe, to jump out to an early lead.

The Nittany Lions were able to tack on two runs in the fourth inning and force Hoosiers starter Emily Godin from the game, but Trainer returned in a relief effort to shut down the comeback by keeping Penn State hitless in the final three innings for a 5-2 win.

Despite a rain-soaked outing, Parshall and Trainer continued to dominate in the pitching circle. That was until the bottom of the fourth inning, when the Indiana senior struggled in the wet environment and walked four batters to give up a run. Godin came on in relief and the Nittany Lions tacked on another run with an error, taking a two-run lead without a hit in the inning.

Parshall, who said after the game the rain didn’t impact her too much since her dad used to make her practice with wet balls, was unfazed by the conditions — pitching a three-hit, complete-game shutout to help the Nittany Lions close the regular season with a 2-0 win.

With the win, Penn State clinched the No. 10 seed in the Big Ten tournament. The Nittany Lions will face seventh-seeded Indiana, which is hosting the tournament, on Thursday. The entire tournament will air on BTN.