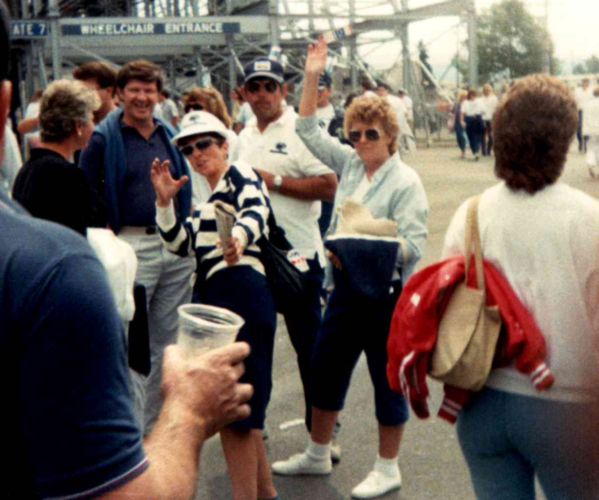 If you ask any Penn Stater what the first thing that comes to their mind when they think about Penn State football, you’d probably hear them talk about Joe Paterno, the Blue Band, or the team’s annual White Out.

Megan Robert was born at Mount Nittany Medical Center back in 1996. Her mom was born and raised in Happy Valley. A local, a townie, a State College native, whatever you want to call her, Megan was born a Nittany Lion.

In 2014, when it came time for Megan to decide where she’d head to college, she made the no-brainer choice and committed to Penn State…the only school she applied to. She graduated four years later and now teaches second grade at Mount Nittany Elementary School, where she tries to pass on that same love for Penn State that she inherited from her aunt many years before.

She recalls spending fall Friday nights at Pennsylvania Furnace having a campfire at her Aunt Pat and Uncle Hank’s house. They’d sit around the fire while the adults packed the motorhome to make the 15-minute drive to the tailgate lots Saturday morning. Packed inside was Megan’s Razor scooter, Hank’s cooler of Natural Light, and Pat’s trademark cocktail, the fire extinguisher — a secret family recipe consisting of various liquors mixed in with orange juice and lemonade.

Pat Serafini grew up in Coalport, Pa., a small town about an hour west of State College. She and Hank moved to Happy Valley in 1970 in search of a better life and built a house closer to family. Nearly 50 years later, they were able to look back on a full life they’ve lived, reminiscing on good memories, time spent with their family, and Saturdays at Beaver Stadium.

They found a good life and honestly wouldn’t change a thing.

Pat and Hank have been season ticket holders for almost half a century. With the exception of the last two seasons, they haven’t missed a home game. If you do the math, that adds up to about 300 Saturdays since the early 70s spent in section WG.

Beyond that, they often traveled to away games, including every Big Ten stadium, as well as some road games at legendary venues such as Alabama’s Bryant-Denny Stadium, Texas’ Memorial Stadium, and West Virginia’s Mountaineer Stadium.

Pat was an avid journaler. She used this as a way to help remember little details and as a way to savor memories. She kept note when it came to Nittany Lions football too, whether it was jotting the score down on a ticket or writing takeaways from each game.

“When I found the old schedule poster from the 1982 season, it made me smile to see some of the comments she wrote about each game,” Megan said. “One of the more blunt takeaways said ‘a kick in the ass!! That comment that said something about getting our ass kicked. That one was just very ‘her.’”

Although Penn State football was without a doubt their favorite thing, Pat and Hank loved to travel. They had several timeshares, including their favorite vacation spot in Crystal River, Florida. After attending more than 20 bowl games over the years, the Serafini’s used those holiday games as another excuse to travel.

With the spirit of adventure, the Nittany Lions took them from Florida to Pasadena all the way to Hawaii, even a National Championship game or two. Every step of the way, Pat got a pennant, slowly accumulating a rather large collection.

I picked a few of my favorites, but there are about 25 pennants in total. If you look close enough, you can see the scores written on each one.

“Although Pat loved watching the games, what she really cherished was the people who she watched them with,” Megan said. “She thrived off the camaraderie and she valued every interaction. Penn State football was an avenue for her to form relationships.”

Pat and Hank never had kids, which may be one reason why they didn’t put a limit on who they considered family. They truly loved the people in their lives.

“No gameday was complete without a stop to 2120 [Pat’s tailgate spot] and you never left hungry or thirsty,” Megan said. “I will always remember sitting with her during the games, she would sneak in a gallon-sized bag of candy, and pass it out for everyone to have a piece. She knew exactly what kind everyone liked, and always made sure she had everyone’s favorite. That is just the type of person she was.”

I met Pat when I was a freshman in high school. I fell in love with Penn State football as a kid going to games with my dad, but I fell in love with the atmosphere the day I met Pat. From the day she met me, she knew me by name. By the end of that season, I swear she knew everything about me.

She was like that for everyone, instantly your friend the day you met her. I spent time at 2120 every gameday because I wanted to talk to her and because she genuinely wanted to talk to me. I was always greeted with a hug, a small bottle of water, and some sort of sarcastic comment. Although we weren’t blood-relatives, she was and always will be family.

Pat passed away on the morning of April 9 following a five-year battle with cancer, keeping her sense of humor until the very end. Her family says that it is no coincidence that she passed on that date (4/09) and they’re sure she is reliving some of Penn State’s greatest memories with her old friend, Joe. 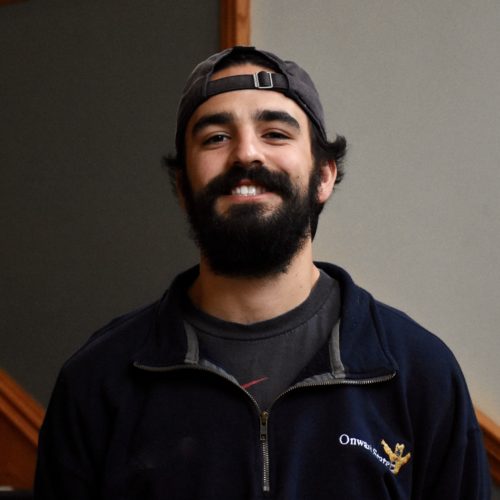 Samuel is a Junior majoring in Film & Video from State College, Pennsylvania. While he is primarily visual staff, he also writes for Onward State and is a Host of our podcast, Podward State. He enjoys music and art... also loves dogs. He also loves sports, rooting for the Steelers, Penguins, and the Knicks.

Share via
A Lifelong Penn State Fan\'s Lifetime Of Memories
https://staging.onwardstate.com/2020/05/01/photo-story-a-lifelong-penn-state-fans-lifetime-of-memories/
Send this to a friend