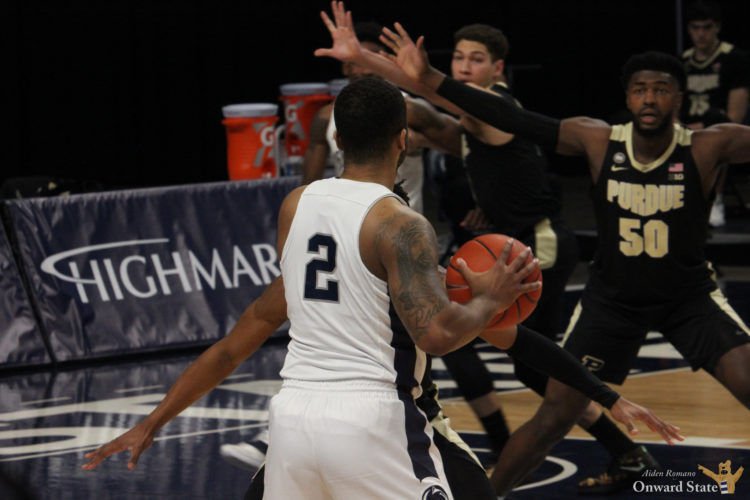 Jamari Wheeler got the scoring started with a three-point basket. After a couple back-to-back stellar defensive possessions, Myles Dread was able to knock down a three. The aggressiveness kept Purdue on its toes.

The Boilermakers adjusted quickly, however, scoring seven straight points after Dread’s three. Trent Buttrick was able to hit another three to stop that scoring streak. Purdue then scored in the paint, but Sam Sessoms followed up with a shifty layup to tie it up.

The Boilermakers went on another small run before Wheeler was able to end it with a drive to the basket. But, the Nittany Lions committed several turnovers, and the momentum was definitely in Purdue’s court.

Myreon Jones got to the paint and drew a foul, but he missed both free throws. It was very symbolic of how the night was going for the Nittany Lions.

Dread was able to break a scoring drought with a catch-and-shoot three, his second of the game. On the next offensive possession, he hit another three pointer. Then, Izaiah Brockington got his evening going with a midrange basket. The tide seemed to be turning the Nittany Lions’ way.

Sessoms got to the free throw line, but he couldn’t make the free looks. The Boilermakers then went on a nine-point scoring run to extend their lead to double digits.

Jones was able to break the scoring drought, driving to the paint and drawing a foul. He would make the free throw. Wheeler also scored on the next possession on a drive to the basket.

Some careless basketball led to some easy baskets for Purdue, and Penn State could not buy a basket. The Nittany Lions went into halftime trailing 41-26.

John Harrar got the second half started with two big baskets. Brockington then followed up with a quick drive to the basket, and that was followed by a similar drive by Wheeler.

Harrar was able to score after a couple of baskets by Purdue, but the Boilermakers had a massive slam dunk as a response. Harrar’s heart was showing, but it wasn’t enough to overcome the hole the Nittany Lions were already in.

After five minutes of no scoring, Harrar broke that streak with a beautiful layup that also drew a foul. He would go on to make the free throw. After another stretch of missed baskets, Jones was able to score to break that streak.

Jones would go on to score again on a midrange shot. But, the Nittany Lions could not get any momentum as they either committed a turnover or missed a shot.

Freshman Dallion Johnson entered the game and was able to log some meaningful playing time for the first time this season. He would airball his first shot of the game, but would sink a floater on his next look.

Other reserves Kyle McCloskey, Patrick Kelly, and Caleb Dorsey would also get into the game to get some game action. Dorsey was able to hit a three as the game went down to the final 90 seconds.

It was an ugly finish to the game, as no one made any more shots. Penn State would fall to the Boilermakers 73-52.

The Nittany Lions will stay at home for Senior Night as Minnesota comes to play on Wednesday, March 3. The game will tip off at 7 p.m. and air on BTN.