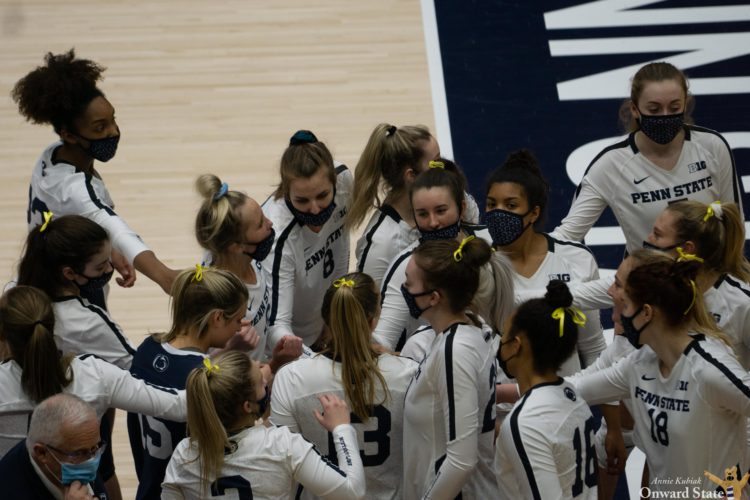 Despite keeping things relatively close all match long, the Nittany Lions simply couldn’t execute and finish the Boilermakers off when they were vulnerable.

Despite strong play from their middles, the Nittany Lions couldn’t quite catch up to Purdue early in the first frame. They eventually tied the Boilermakers 11-11 thanks to an ace from Anastasiya Kudryashova. Minutes later, Penn State tied Purdue at 13, 14, 15, and 16 points apiece, too.

Following an ace from Gray, Penn State took a 17-16 lead — its first advantage since scoring the match’s opening point. The Nittany Lion’s next lead came 22-21 thanks to a kill from Annie Cate Fitzpatrick, prompting Purdue to take its first timeout of the match.

Moments later, Purdue stormed back to take a late 23-22 lead, forcing Penn State head coach Russ Rose to burn his first timeout. The Boilermakers capped the set off with a 4-0 run to win 25-22, taking an early 1-0 lead in the match.

The Nittany Lions bounced back well to begin the second game. Thanks to a 3-0 run, Penn State jumped out to an early 4-1 lead following an ace from setter Gabby Blossom and kills from Fitzpatrick and Jonni Parker.

Penn State’s advantage ran dry thanks to a 5-0 Purdue run, which gave the Boilermakers a 11-9 lead midway through the set and prompted a Nittany Lions timeout. Following three straight points, including back-to-back aces from Jenna Hampton, Penn State took a 16-14 lead into a Purdue timeout.

Despite battling back and even earning a set point at 24-23, Penn State couldn’t counter a 3-0 Boilermaker run and wound up dropping the second frame 26-24, allowing Purdue to take a 2-0 lead.

Strong play at the net and a few impressive digs helped Penn State get off on the right foot to begin the third set. The Nittany Lions led 9-5 early, capped off by a huge block from Gray. They took an 11-7 lead into yet another Purdue timeout.

Penn State’s strong play continued enough for it to take a 20-15 advantage into the set’s next timeout. Moments later, Purdue tightened things up by scoring three straight points, cutting its deficit to 20-18. Despite the scare, Parker fired off a kill to win the frame 25-21 and help Penn State avoid a sweep.

To begin the fourth set, Purdue embarked on a massive 7-1 run, prompting a quick Penn State timeout. Back-to-back points (a Kudryashova kill and Purdue attack error) briefly stopped the bleeding, but the Boilermakers didn’t let up en route to a 12-3 lead midway through the set.

Purdue took a 19-8 lead into a Penn State timeout, leaving the Nittany Lions in dire straits with hopes of a reverse sweep quickly fading. Soon enough, the Boilermakers iced the game with a kill to win the set 25-14 and the match 3-1.

Hord led Penn State with 13 kills on the night, while Fitzpatrick, Gray, and Kudryashova each posted 10. Blossom dished out 46 assists and a team-high 15 digs in her fifth double-double of the season.

The junior standout really showed off against Penn State. She posted 14 kills on .435 hitting and added two digs and four blocks to cap off a truly well-rounded performance.

Penn State (4-5) and Purdue (9-4) will face off once again Saturday night to finish off a two-match series. First serve from Rec Hall is set for 2 p.m. on ESPNU.